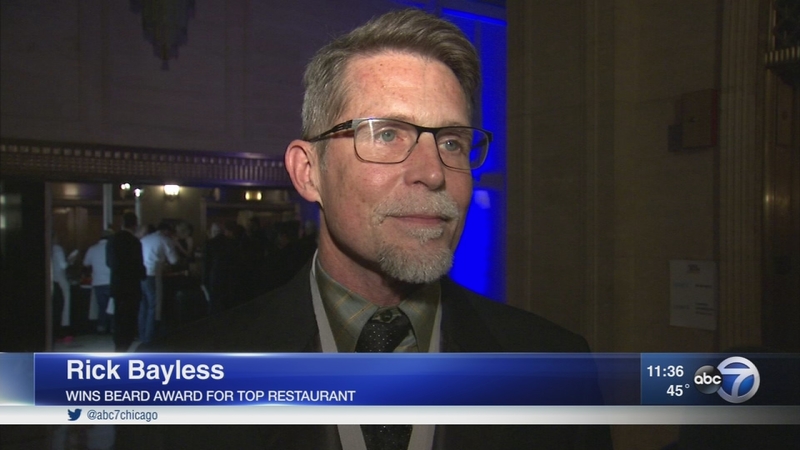 Another Philadelphia foodie - Stephen Starr of Starr Restaurants - won the outstanding restaurateur award at a ceremony many consider the Oscars of the culinary world.

"We just wanted to bring some of the heart and soul that people have shared with us in Mexico and share it with the people in this country," an emotional Bayless said as he accepted the award at Chicago's Lyric Opera. "We have in our restaurants always sought to put heart first."
EMBED More News Videos

The Oscars of the food world - the James Beard Awards - are back in Chicago for the third year in a row.

Bayless has won many Beard honors over the last 26 years, including outstanding chef in 1995 and Humanitarian of the Year in 1998. Topolobampo is a well-known favorite of Barack and Michelle Obama and previously received nominations for outstanding restaurant and outstanding service. Another James Beard Award-winning Chicago chef - Grant Achatz of Alinea - presented Bayless with the award.

Solomonov is from Israel but was raised in Pittsburgh. He was nominated for the top honor last year but didn't win. Zahav features modern Israeli cuisine. Solomonov's current menu at Zahav highlights creatively paired simple foods. His brisket is served with apricots, and he offers roasted lamb with pomegranate and chickpeas.

"I'm incredibly lucky that my work is my life's work," he said Monday night.

The Beard Awards moved to Chicago in 2015 after being based in New York for more than 20 years. The James Beard Foundation announced last October that the awards will remain in Chicago through 2021. This year's host was actor Jesse Tyler Ferguson of the TV sitcom "Modern Family."

"You have these insane creative little minds," Ferguson told the crowd of chefs and restaurateurs during his opening monologue. "Us commoners we're just trying to keep up. You're constantly challenging us to expand our palettes and try new things. It's so inspiring."
Presenters included Hollywood names such as actresses Sophia Bush and Valerie Bertinelli, actor David Burtka and former boxer Laila Ali.

This year's best new restaurant honor went to Le Coucou in New York, one of Starr's restaurants. The outstanding baker award went to Mark Furstenberg of Bread Furst in Washington.