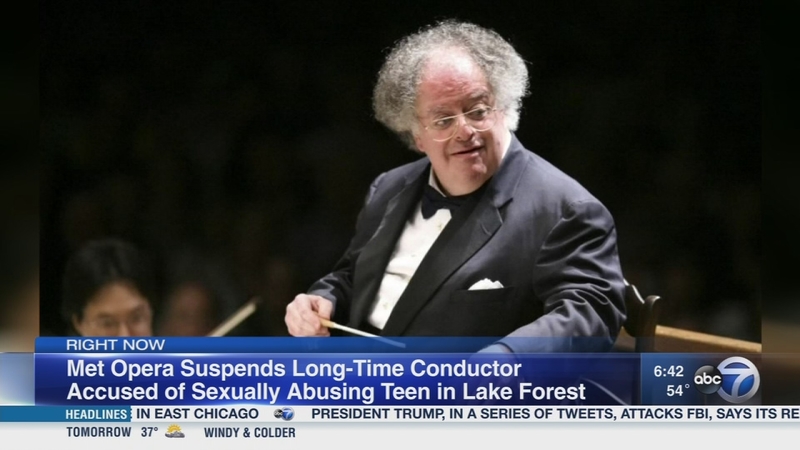 NEW YORK -- New York's Metropolitan Opera on Sunday said it was suspending its relationship with longtime conductor James Levine pending an investigation into multiple allegations of sexual misconduct against him.

"Mr. Levine will not be involved in any Met activities, including conducting scheduled performances at the Met this season," the Met said in a statement.

The Met also said it has appointed attorney Robert J. Cleary, a former U.S. attorney and the current head of the investigations practice at the Proskauer Rose law firm, to lead the investigation into the allegations that took place from the 1960s to 1980s.

The move to suspend Levine came a day after the New York Post first reported that one of Levine's accusers claimed he had sexual contact with Levine as a teenager. Met officials said they were launching an investigation. Then on Sunday, The New York Times reported similar accounts from two other men accusing Levine of sexual misconduct.

One of Levine's accusers, Ashok Pai, also spoke to The Associated Press in recent weeks but declined to tell his story on the record at the time. He declined to be interviewed again when contacted this weekend.

According to the Times, Pai said he was sexually abused by Levine starting in the summer of 1986, when he was 16. He reported the allegations to the police department in Lake Forest, Illinois, in October 2016. Details of the police report were first reported on Saturday on the New York Post's website. Met officials said they learned of the police report last year.

Pai said he reached out to police in Lake Forest because some of his encounters with Levine took place there in the mid-1980s. Levine served as music director at the Ravinia Festival, outside Chicago, from 1973 to 1993.

Chris Brown played principal bass in the St. Paul Chamber Orchestra for more than 30 years. He told the Times that he and Levine masturbated each other when Brown was 17 at the Meadow Brook School of Music in Michigan, where Levin was on the summer program's faculty.

James Lestock described a similar account there when he was a 17-year-old cello student.

"Based on these new reports, the Met has made the decision to act now, while we await the results of the investigation," said Peter Gelb, Met General Manager. "This is a tragedy for anyone whose life has been affected."

An email to Levine's manager seeking comment on the accusations was not immediately returned.

Met officials said in an earlier statement that Levine has denied the charges.

On Saturday afternoon, Levine conducted a performance of Verdi's "Requiem" that was broadcast on radio worldwide. It was expected to be his last appearance at the Met for at least the rest of this year and possibly the foreseeable future. Levine was scheduled to conduct a New Year's Eve gala performance of "Tosca."

Months after the Met acknowledged learning of the sex allegations in the Illinois police report, the opera company honored Levine with the title of Music Director Emeritus.

The Associated Press does not generally name alleged victims of sexual abuse unless they come forward with their allegations. In this case the three alleged victims agreed to have their names published in the Times.

The accusations against Levine, among the most prominent classical music conductors in the world, are the latest in a stream of sexual misconduct charges involving high-profile men in entertainment and the media that have rocked the nation since accusations against film mogul Harvey Weinstein were reported in October.

Levine has struggled with health problems including Parkinson's disease in recent years but was scheduled to conduct several productions this season.