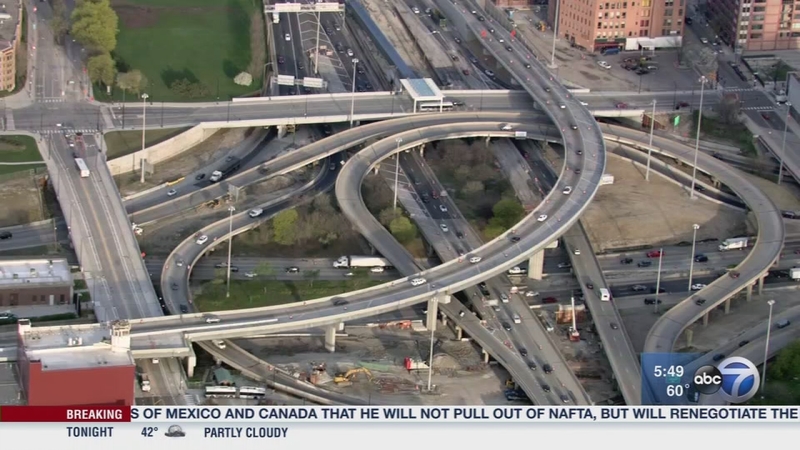 CHICAGO (WLS) -- What's driving you crazy? Many of people reached out to ABC7 Eyewitness News Traffic Anchor Roz Varon to get answers.

Many people have asked when work on the Jane Byrne Interchange will be finished. A Facebook fan named Cheryl takes the Dan Ryan Expressway to the Eisenhower Expressway. She said traffic is just as bad as before the new flyover ramp opened. She wanted to know when things would get better.

The Jane Byrne Interchange is the spaghetti bowl of ramps linking the Eisenhower, Dan Ryan and Kennedy expressways just west of downtown Chicago.

Built in the late 1950s, and previously named the Circle Interchange, it was part of the first inner-city expressway in Chicago. Now, more than 400,000 vehicles use the interchange daily. That makes the Jane Byrne making it one of the worst bottlenecks in the nation.

Construction to rebuild the interchange - and more than 15 ramps and bridges in and around it - began in 2014. The first new ramp, the flyover from the inbound Ryan to the outbound Ike, opened late last year. But it didn't ease the congestion, since only one lane of the newly designed ramp was able to open.

"In order for the second lane to open on the flyover, we need to complete the westbound I-290, add lanes and retaining wall and noise wall contracts," Illinois Department of Transportation Bureau Chief of Construction Paul Gregoire said. That's all the work being done from the Old Post Office to Ashland Avenue.

The next set of new ramps to open will be westbound Congress to both the outbound Kennedy and outbound Ryan. Those are scheduled to be finished by fall of next year.

After that, crews will tackle the ramps from the inbound Ike to the outbound Kennedy and outbound Ryan. When the entire project is finished in fall 2021, it's expected to cut traffic delays by 50-percent.

Many have asked, "Why not just close it down, detour traffic and rebuild it quicker?"

According to IDOT engineers, there is no detour on nearby surface streets that can accommodate the high volume of traffic and truck traffic.