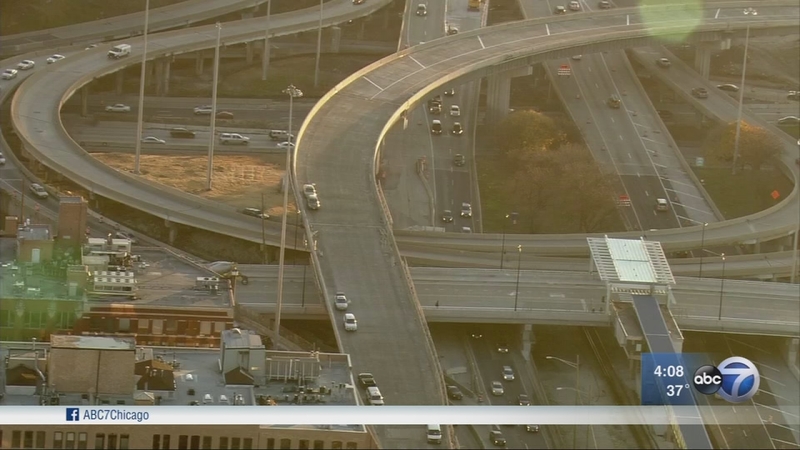 CHICAGO (WLS) -- Thousands of commuters who use the Jane Byrne Interchange will get some traffic relief with the opening of a new flyover ramp this weekend.

The new ramp connecting the inbound Dan Ryan Expressway to the outbound Eisenhower Expressway is slated to open on Sunday, weather permitting.

The new 1 mile long ramp is designed to ease the pinch point on the inbound Dan Ryan caused by drivers merging in at the last minute to access the Eisenhower.

Only one of the two lanes on the ramp will be opened on Sunday. The other lane is expected to be open in the summer of 2018.

Temporary closures will go into effect this weekend for the opening of the new flyover ramp. The ramp from the inbound Kennedy Expressway to the outbound Eisenhower will be closed from 8 p.m. Friday until 5 a.m. Monday. The westbound Congress Parkway will be reduced to one lane from Canal to Morgan streets.
Many drivers can't wait for the ramp to open.

"I am so excited it's pathetic. It's one of the biggest messes I have ever seen," said commuter Bill Hacker.

"It takes a while to fix anything. You gotta break a few eggs to make a good omelet, so it took some time and some construction, but it's great to have to have it open once it's open," said Bill Nathe.

The flyover ramp project has been under construction since September 2014. A total of eight primary ramps will be rebuilt as part of the Jane Byrne Interchange reconstruction project. Improvements will be made to several nearby entrance and exit ramps on the Eisenhower, Kennedy and Dan Ryan.