JB Pritzker for president? Illinois governor tries to shoot down speculation about 2024 bid 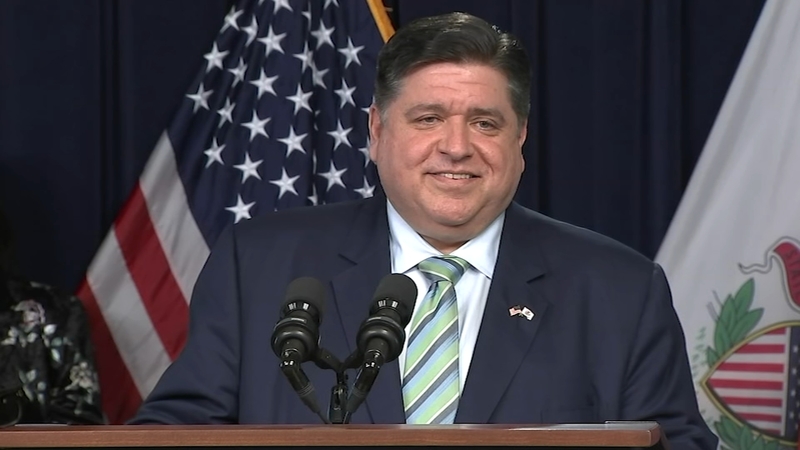 Pritzker tries to shoot down speculation he could run for president

CHICAGO (WLS) -- Governor JB Pritzker is trying to shoot down speculation that he may be interested in running for president if Joe Biden does not seek re-election in 2024.

Pritzker faced a barrage of questions after a New York Times article suggested he would be interested in running for president if Joe Biden leaves after one term.

"I have never spoken privately with anybody or publicly about that," Pritzker said. "Of course people have mentioned this to me on occasion, but I've never had a conversation with anybody."

At a bill signing Tuesday, the governor made it clear where his focus is, not where it might be.

"I am focused on this job, I love this job," Pritzker said. "I really love the job of being governor and I'm gonna continue doing it as long as I can."

The first-term governor has good reason to tamp down the notion he may have ambitions at 1600 Pennsylvania Avenue.

"You can't have that kind of speculation out there, particularly when you're about to launch a major run for re-election," said Laura Washington, ABC7 Political Analyst.

Political observers were split on what Pritzker's future aspirations might be.

"I have always assumed at some point in JB's life he would run for President," said Kitty Kurth, a Democratic strategist.

Two other strategists who did not want their names used were split on the idea. One said, "Every governor looks in the mirror and sees a president." The other was adamant: "There's no chance he's running for president."

At the Cook County Democratic Party Slating Committee meeting Tuesday, Pritzker got the endorsement, speaking only about his reelection.

"He hasn't said anything about president, senator, nothing else just, he's running for governor and we're gonna support him for governor," said Alderman Walter Burnett, who chairs the Cook County Party's statewide slating committee.

"Down the road, there might be a potential, you know, opening for him to run. I don't see why he shouldn't," said Iris Martinez, Clerk of the Cook County Circuit Court, on a potential Pritzker presidential run.

But despite Pritzker's protestations, having his name out there as a potential presidential candidate might be a good thing for him.

The downside for Pritzker, according to one political strategist, is that now that his name is out there, what happens in his reelection campaign is going to be highly scrutinized. Republicans are already jumping on the news, saying the governor should focus on fixing Illinois' problems and not be dreaming of the White House.
Report a correction or typo
Related topics:
politicschicagoloopjb pritzkerpresidential raceillinoisjoe biden
Copyright © 2022 WLS-TV. All Rights Reserved.
JB PRITZKER
New initiative will help people who travel to Illinois for abortions
Aurora Mayor Richard Irvin announces run for IL governor
Aurora mayor to announce run for governor Monday: sources
Illinois election season officially kicks off
TOP STORIES
Chicago police coming down hard on retail theft rings
Conjoined twins separated after 10 hour surgery
New initiative will help people who travel to Illinois for abortions
Chicago Brewery mixes up beer and wine hybrids for new experience
What to know about tensions between Russia, Ukraine
NCAA criticized for changing policy on transgender athletes
Booster shots needed against omicron, CDC studies show
Show More
Rebuild Illinois investigation reveals deep ties to ex-House speaker
Here are some money-saving tips for teens and students
Organizers hold Oak Lawn meeting to combat gun violence against kids
ISP arrests several people after drag race, high-speed chase
Truck with 100 monkeys crashes, 1 still on the loose, police say
More TOP STORIES News