'Jeopardy! The Greatest of All Time': Will Game 4 determine who earns GOAT title? 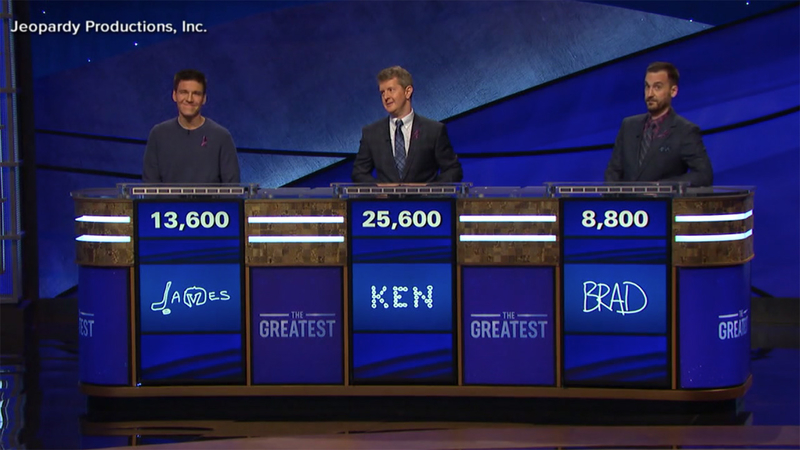 The next match in the "Jeopardy! The Greatest of All Time" tournament may determine who will be crowned the game show G.O.A.T.

After Thursday night's Game Three, Ken Jennings took the lead, meaning he needs one more victory to win the epic multi-night tournament. "Jeopardy James" Holzhauer racked up the most points in Game Two, and Brad Rutter has yet to score a win.

Jennings became a household name during his record 74-game winning streak, while Holzhauer holds the record for all 15 of the top single-day winnings records, and Rutter is the highest money winner of all time across any television game show.

Jennings' win came as Holzhauer floundered, even losing it all in his famous daredevil Daily Doubles.

Even though he didn't win, Rutter found redemption in this match, earning his first Daily Doubles win of the tournament.

Yet Jennings took the crown, edging his way to the lead with the "all in" tactic populatized by Jeopardy James. He bet 9,200 points on a Daily Double and won by knowing which 1832-1833 "crisis ended when South Carolina backed down from its efforts to void federal law" (nullification).

One clue getting buzz on social media was, "A 2019 New York Times article says this 2-word phrase 'marks the end of friendly generational relations.'"

Jennings gave Trebek the answer, "What is ok boomer?" and it did not go unnoticed that the 45-year-old said this viral retort to the 79-year-old host.

"@KenJennings saying "Ok Boomer" to Alex Trebek is the greatest @Jeopardy moment of all time," one viewer tweeted.

@KenJennings saying “Ok Boomer” to Alex Trebek is the greatest @Jeopardy moment of all time pic.twitter.com/bzxj4EBPDo

RELATED: 1990 video shows Alex Trebek explain what it's like behind the scenes of 'Jeopardy!'

This time, none of the contestants won Final Jeopardy with the clue, "These 2 foreign-born directors have each won 2 best director Oscars but none of their films has won Best Picture."

Actually, Jeopardy James first started to write Pat Sajak's name, the host of "Wheel of Fortune." To that, Trebek said, "I wished you had risked more points."

Rutter was up next, writing, "Ken es el hombre," translated from Spanish means fellow competitor Ken (Jennings) is the man. But Rutter was not done. His response continued: "Eagles Super Bowl LII Champs."

Trebek laughed and said, "Ladies and gentlemen, I'd like to welcome you to the Jeopardy comedy hour."

The correct response was, "Who are Ang Lee and Alfonso Cuarón?"

While Jennings also got it wrong (he did correctly guess Ang Lee), he won his second match.

For this tournament, the contestants earn points in each game instead of dollars as in a regular "Jeopardy!" show. With two games in each match, the contestants' earnings are combined for a grand total at the end of each night. The one who wins three matches gets the $1 million prize.

Ken Jennings takes Match 3, but he still needs one more win to be named the #JeopardyGOAT. Will James or Brad take the next one? Tune back in TUESDAY, 1/14, at 8|7c on ABC! pic.twitter.com/G9y0JsnsLB