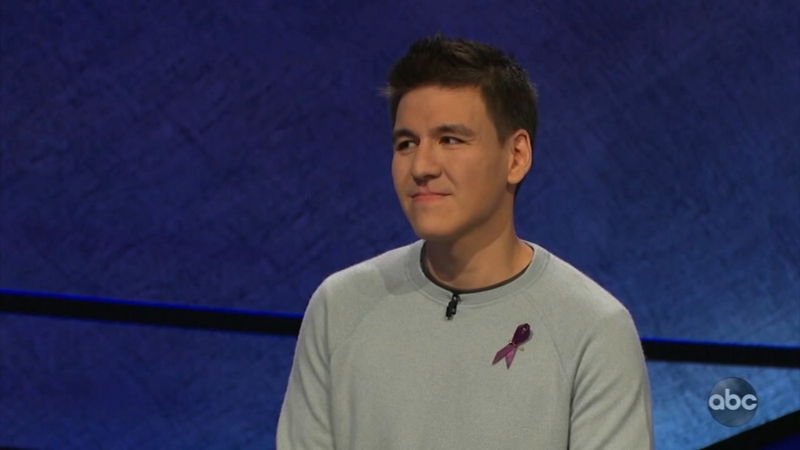 NAPERVILLE, Ill. (WLS) -- Family, friends and fans of 'Jeopardy James' Holzhauer turned up in Naperville to watch him compete in the first night of the Jeopardy Greatest of All Time tournament, and money for a good cause.

Holzhauer faces Ken Jennings and Brad Rutter as the top three winners in Jeopardy history go buzzer-to-buzzer to see who is best.

The tournament works like this: Each night, the three contestants face off in two back-to-back games. Whoever has the highest cumulative point total after the two games wins the night, or the match. The first contestant to win three matches wins the title of Jeopardy Greatest of All Time.

Night one of the brain and buzzer battle was more of a two-way tussle featuring the Naperville native.

His hometown fan club was a captive crowd, hanging on his every answer.

"How they can come up with these answers so quickly is, like, oh my God," said Tom Senz, fan.

A sports gambler by trade, Holzhauer made history in April for the most money won in a single game, then beat his own record three times amassing a total of $2.7 million in winnings.

He has stiff competition against Jennings, who holds the record for longest winning streak at 74 games, and Rutter, who is the highest money winner on any game show and the one contestant who has never lost to a human.

"The math becomes super important, especially in a game where you don't have any daily doubles," explained Ian Holzhauer, James' brother.

The watch party is also the opportunity to raise money for a good cause. Attendees filled out charity scorecards benefiting the Lustgarden Foundation, which funds pancreatic cancer research.

Jeopardy host Alex Trebek announced he had been diagnosed with stage four pancreatic cancer in March 2019.

"It really says a lot about the Naperville community, the community we both grew up in that they invested this much in a local charity and in supporting our family," Ian Hozlhauer said.

Down against Jennings heading into final Jeopardy, Holzhauer proved he's earned his spot in the tournament. He finished just $200 behind Jennings.