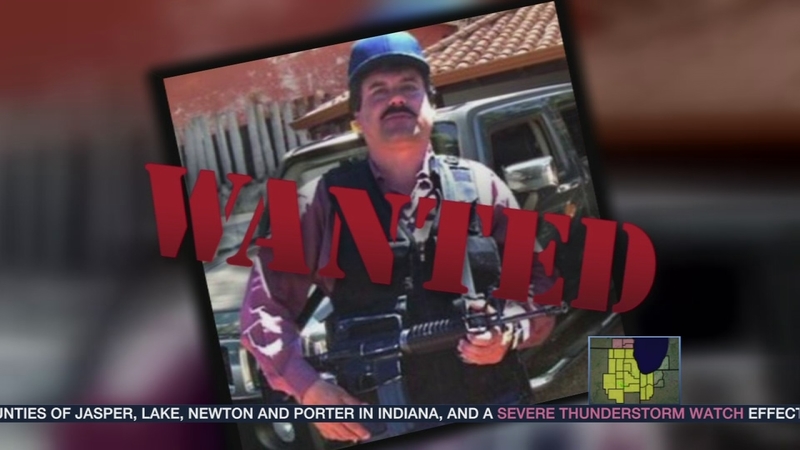 El Chapo on the loose after jailbreak

CHICAGO (WLS) -- An intense manhunt is underway for Joaquin "El Chapo" Guzman, the most powerful and dangerous drug lord in the world who escaped from a Mexican prison over the weekend.

Also known as "Shorty," El Chapo could be a long way from the Mexican prison from which he escaped Saturday night. Not only did he have a two-hour jump on authorities before they realized he was gone, he has a private army, air force and navy at his disposal. Many of his armored vehicles, jet aircraft and even submarines are financed by metro Chicago drug sales, where law enforcement says Chapo controls 80 percent of the marketplace.

The biggest difference between El Chapo and bin Laden is that Chapo is still alive and now a free man.

He broke out of this prison in an incident that has become the Titanic of Mexico's prison system.

After previously escaping prison in a laundry cart, Mexican justice officials had promised Chapo was behind bars for good. Now, like the unsinkable Titanic, El Chapo got away, likely through a small hole beneath the shower in his cell, a ladder to drop himself 30 feet below ground, winding his way through a mile-long labyrinth of tunnels, before climbing out through this hole in a nearby home under construction the past few months. Building equipment didn't seem out of place according to locals, who claim they had no clue it was being used to execute El Chapo's escape plan.

Investigators are now questioning at least 18 prison workers, trying to figure out how he slipped away; whether using money, threats of violence or both.

"He is a complete savage," says Tom Fuentes, former FBI Assistant Director. "What they do and how they do business is based on complete terror."

U.S. officials are angry, but not particularly surprised that the drug lord escaped.

They had tried and failed to have him extradited to the U.S., possibly Chicago, where he is currently atop a federal indictment.

"We always had to be very careful in trying to intrude too much into the sovereignty of Mexico," says Alberto Gonzales, Former U.S. Attorney General