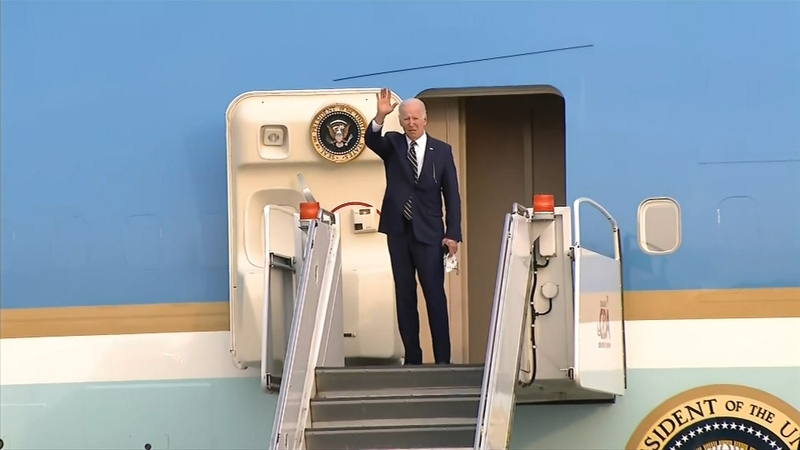 The first stop is a family farm in Kankakee, but the president has a full day planned.

President Joe Biden thanked farmers for being the "backbone of democracy" during his visit to a Kankakee, Illinois farm Wednesday.

Biden, along with Agriculture Secretary Tom Vilsack, visited Kankakee to discuss the impact of Russia's invasion of Ukraine on food supply and prices at home and abroad and ways to lower costs.

The president's visit coincided with the middle of planting season, and at a time when inflation is very much top of mind. Biden heard from farmers directly and offered some assistance.

President Joe Biden was in Kankakee Wednesday to talk to farmers about what his administration is doing to help them.

"We always know there's going to be challenges ahead, so to have him here was just a way to bring it back home of what we are facing right now, and how does that fit and play on the world stage," said Jeff O'Connor, who gave the president a tour of his farm.

Biden said his administration will offer assistance to use technology to improve production, expand access to double cropping insurance and increase investments in domestic fertilizer production.

"We have to invest in our farmers and reduce costs and reduce prices for consumers. We have the most productive most efficient farmers in the world," Biden said.

This part of Illinois tends to be more conservative, and there was a contingent of Donald Trump supporters who were kept away from the farm. They wanted Biden to know not everyone welcomed his visit. But farmer Keith Mussman made sure he took the opportunity to shake the president's hand before he left.

"I'm encouraged by the decision to allow crop insurance on double crop soybeans, that's been an issue of here farther north in the state, it's not been accessible to guys up here," Mussman said. "You're totally at risk of weather if you have wheat and want to put in a soybean crop afterwards."

"I personally thought it was pretty encouraging. I think either we have had or now have the attention of the administration," he added.

Inflation at the supermarket and the pump were also on the minds of many.

"I think for the average person going into the grocery store and looking at the prices of food is ... you have to be almost independently wealthy to even shop at Walmart," Kankakee resident Bernard Ryan said.

"It's frustrating to have to spend more money, but, for me personally, it kind of is, like, it is what it is," she said.

"It's a little frustrating, but I feel like a lot of it is because what's going on in Ukraine, and I'm glad they're not bombing my house," Kankakee resident Wayne Marti said.

The president then traveled back to Chicago to speak at the International Brotherhood of Electrical Workers International Convention at McCormick Place before attending a fundraiser and heading back to Washington.

"This year alone, Illinois will receive $1.9 billion in highway funding for roads and bridges," Biden said at that event.

On Tuesday, with the midterms just six months away and his approval rating sagging, the president said fighting inflation is his administration's No. 1 domestic priority, blaming the COVID pandemic and war in Ukraine.

The president arrived at O'Hare on Air Force One about 11 a.m. and briefly met with Cook County Board President Toni Preckwinkle before getting into another aircraft and flying to Kankakee, where the average person is struggling with that inflation.