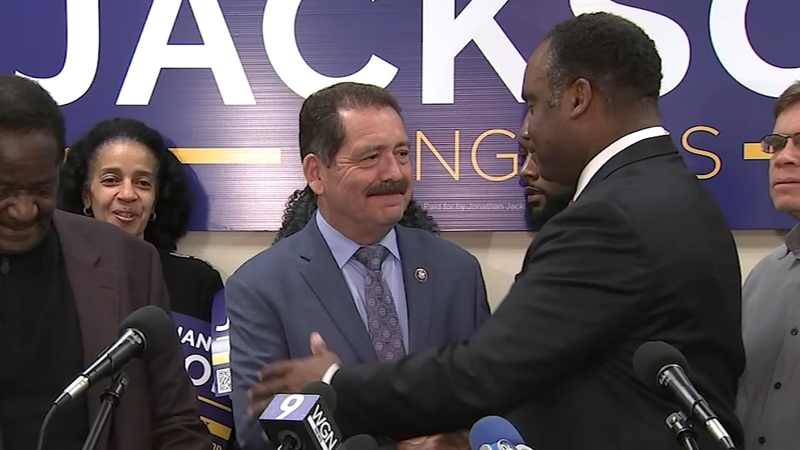 Jackson, the Chicago-based national spokesman for Rainbow PUSH and the son of Rev. Jesse Jackson, was joined by Garcia (D-Illinois 14), who enthusiastically gave his support to the candidate.

"I proudly stand with Jonathan Jackson and throw my wholehearted support and endorsement to his effort to become the next congressman of the First District," Garcia said.

Rush previously endorsed Karen Norington-Reaves before Jackson got in the race.

"I think at this point, all, any endorsements you get are probably going to be significant because this is where everybody is trying to elevate themselves above the clutter," said political consultant Delmarie Cobb.

Jackson is counting on Garcia's endorsement to translate into campaign donations, in which he currently lags behind some other candidates. Garcia has promised to campaign and fundraise for Jackson.

"Chicago is a very sophisticated market. People understand what money does, and more importantly, people understand those who care," Jackson said. "So, his endorsement today is the message that exceeds any value you can put on any capital on any money."

Currently, there are 20 Democrats in the race, but eight of them are facing challenges to their nominating petitions, which means the field could get significantly whittled down.

"And a lot of people, even if they make it on the ballot, they simply will not have the money to be viable candidates," Cobb said.