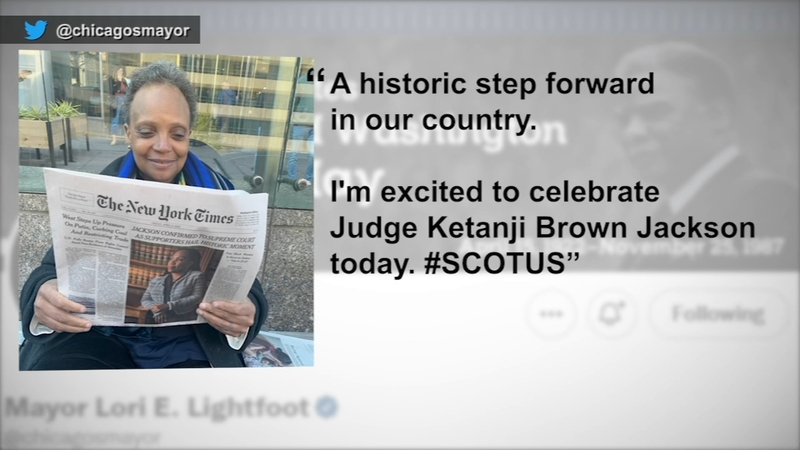 CHICAGO (WLS) -- The White House hosted a celebration Friday for the first Black woman ever to be appointed to the nation's highest court.

Judge Ketanji Brown Jackson was joined by her family and supporters as President Joe Biden honored her one day after her historic confirmation by the Senate. Chicago Mayor Lori Lightfoot was among the dignitaries who flew in to Washington to witness history.

Jackson herself was overwhelmed with gratitude, thanking so many people for helping her reach this milestone as the first Black woman to be confirmed to the U.S. Supreme Court.

"Thank you as well Mr. President for believing in me and for honoring me with this extraordinary chance to serve our country," Jackson said.

Biden praised Jackson, saying when he made the commitment to nominate a Black woman to the Supreme Court, he could see this day.

"People of every generation, every race and background felt this moment, and they feel it now," Biden said. "They feel a sense of pride and belonging and believing and knowing the promise of America includes everybody."

Among the dignitaries in the crowd was Senator Dick Durbin, whom the president thanked for steering Jackson's nomination through the Senate.

Honored to be at the White House today to celebrate this historic moment for Judge Ketanji Brown Jackson! #SCOTUSConfirmation pic.twitter.com/ZAVdAO5wn1

Attorney General Kwame Raoul and Mayor Lori Lightfoot both tweeted photos from of their opportunity to witness history at the White House.

"Well, I will say that it's one of the moments that I'm probably going to cherish and remember for the rest of my life," Lightfoot said as she reflected on several remarkable moments.

A historic step forward in our country.

"One was her talking about the fact that the arc of her family's story went from segregation to the Supreme Court in one generation. I don't think there was a dry eye in the audience."

Jackson also drew laughs when she joked that her daughters never thought they would be able so skip school by spending a day at the White House. But she also got emotional as she looked ahead to joining the Supreme Court this summer.

"As I take on this new role, I strongly believe that this is a moment in which all Americans can take great pride," Jackson said.

Jackson was humbled by the moment, saying that she would be lucky to have just some of the wisdom, grace and joy demonstrated by Justice Stephen Breyer, whom she clerked for and she will replace this summer.

For Juliana Stratton, the first Black woman elected as Illinois lieutenant governor, Jackson's trailblazing path is all too familiar.

"I am overjoyed," she said. "I am excited. I think about how this moment resonated with me."

Stratton assumed off in January 2019. Since taking office she has spearheaded justice and equity initiatives for women and girls and agrees there needs to be more diversity in federal courts.

"I recognized how important it is for little Black girls, little girls all over the country, all children, quite frankly, to know that this space, the Supreme Court, is a space that they belong as well."
The lieutenant governor was among the Illinois delegation who met with Judge Jackson during her confirmation hearing.

As a lawyer herself who has served as a mediator, arbitrator and administrative law judge, Stratton uniquely understands the pressure and expectations that come with the significance of the moment.

"So I think that she can expect that there are going to be a lot of young people who are going to be inspired by her, who will tell her because she is, they will be too," Stratton said.
Report a correction or typo
Related topics:
politicsillinoisu.s. supreme courtrace and culture
Copyright © 2022 WLS-TV. All Rights Reserved.
TOP STORIES
Official admits police made 'wrong decision' in TX shooting
Shocking video shows gunmen firing dozens of shots near Cabrini Green
Mother accused of killing daughter over 'taking her dad's side': cops
3 shot on West Side, Chicago police say
Texas gunman threatened rapes, shootings on Yubo app, users say
3 hospitalized after west suburban wrong-way crash on I-290, ISP says
Your Memorial Day BBQ will cost a lot more this year
Show More
Cause of death for boy found dead in suitcase revealed, police say
Woman killed in SW Side hit-and-run while crossing street ID'd: ME
Pickup truck barrels through Downers Grove home, leaving 2 hurt
Texas school shooting victim has family ties to Chicago area
Texas survivor apologized to dad for blood on clothes, losing glasses
More TOP STORIES News