'My biggest fear was him overdosing': Juice WRLD's mom speaks out for 1st time, hopes rapper's death is lesson for others 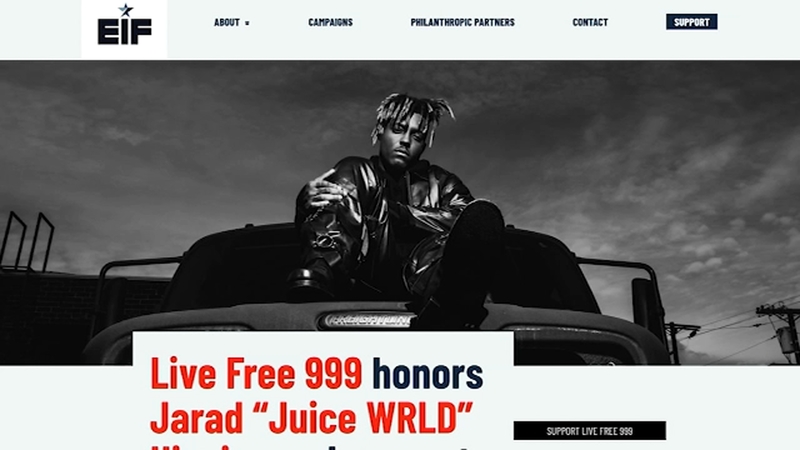 CHICAGO (WLS) -- He was at the top of the music world, living out his dreams, when Chicago-born rap superstar Juice WRLD died of an accidental drug overdose last December shortly after arriving at Midway Airport.

Now, his mother is speaking out for the first time since that day, in the hopes that her son's death will be a lesson to others.

"It was devastating, but one thing I decided early on was, I was not going to hide the fact that he died from a drug overdose," said Carmela Wallace.

Jarad Anthony Higgins had just turned 21 and was coming home for a birthday celebration.

The medical examiner said he died as the result of oxycodone and codeine toxicity after suffering a seizure.

"I didn't want to keep that secret because a lot of people deal with that every day," Wallace said.

The Homewood-Flossmoor graduate had recently been named Billboard Music Award's "Top New Artist" and was among the most celebrated entertainers around.

But to Wallace, he was just her baby boy.

"Juice WRLD was an icon but Jarad was my son," she said. "I didn't treat him like a celebrity. In fact, the first time I saw him perform, it was in Chicago. I forget where, but I saw the crowd and I saw the girls and 'take a selfie with me.' He was pumped up. He was still living with me at the time and when he came home, I said, 'take out the garbage,' because I just wanted him to stay humble."

She said the two were incredibly close and kept very few secrets. They talked about everything, including his struggles.

"I said, 'if you have anxiety, then you need to get medicated properly for it instead of medicating yourself," Wallace said she told her son. "I talked to him about it. I told him my biggest fear was him overdosing on the stuff. That's why I made the decision I have to talk about it with other people. I can't keep that as a secret."

Through a new foundation called "Live Free 999," Wallace said it's now her mission to help other young people dealing with mental health issues and drug addiction. She said her inspiration for the name came from a slogan on his favorite jacket. She turned the 666 upside-down.

"That's our objective with our foundation. Normalize the conversation, so it has to start with me," she said. "I hope it's what he wanted, was a legacy of healing. To let people know that you don't have to suffer alone," Wallace added.

Wallace said many of her son's fans have reached out to her after his death with their own stories and said that's why so many young people are now involved with the foundation.

She said they are the ones who can relate best to those they hope to reach.