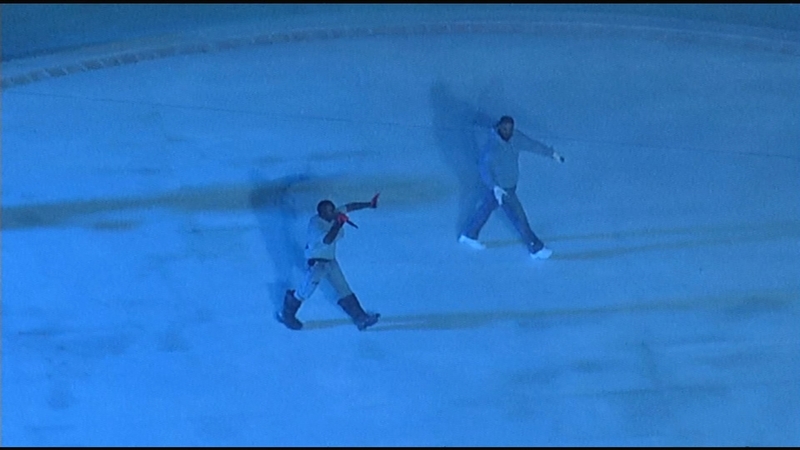 Both of them aptly describe Chicago street gang magnate Larry Hoover, whom the rapper sang on behalf of Thursday night in the Los Angeles Coliseum.


Hoover, 71, wasn't able to attend the show in SoCal because he is gone for the rest of his life behind bars at the nation's Supermax prison in Colorado.

Hoover, considered the most powerful and bloodthirsty gangster in Chicago since Al "Scarface" Capone roamed the streets almost a century ago, is serving six life sentences for his role as the murderous and ruthless chairman of Chicago's feared Gangster Disciples criminal organization. In 1997 he was convicted of murder conspiracy, extortion, money laundering and other federal charges. When he was prosecuted, authorities estimated the gang did $100 million in illicit business. He has also been convicted in Illinois state court on similar violent charges.

Despite his criminal history, and the unending prison sentence he is serving, Kanye West and fellow rapper Drake put on a show at the Coliseum entitled "Free Larry Hoover." While some of the in-person show tickets were still listed for $300 on internet broker sites the day of the concert, it was also streamed live to more than 240 nations on Prime Video, via the Amazon Music app and at select IMAX theatres across the U.S.

Hoover was the headline cause of the evening according to ads and promos, along with a stated push for sentencing and prison reform.

Hoover's role as guest-of-honor in absentia deeply riled some people, notably Ron Safer, the former assistant U.S. attorney in Chicago who led a prosecution team that convicted him.

"Larry Hoover was the undisputed leader of the largest monolithic gang in the nation" Safer told the ABC7 I-Team in an interview on Thursday. "That was the driving force behind the largest murder total that the city of Chicago has ever known. There were, I believe, 954 murders in the city of Chicago and the majority of those tied to the Gangster Disciples. And Larry Hoover was in charge at that time."


In a state with a long list of scandalous, heinous crimes and the villains who committed them, Hoover ranks as "one of the most notorious criminals in Illinois history" according to U.S. District Court Judge Harry Leinenweber who recently denied the gangster's request for a merciful release.

In addition to being routinely denied in courts, and at parole hearings, Hoover also was snubbed by President Donald Trump in 2018 after Trump pal Kanye West asked him to commute the killer's sentence. The president did not offer Hoover any relief before leaving office in early 2021.

So now, during a benefit concert intended to "Free Larry Hoover," the world's eyes witnessed two big-time rappers take the stage at Los Angeles' Coliseum in a concert also beamed around the globe. The Coliseum is owned and operated by the University of Southern California.

The I-Team asked USC officials why they would allow a show on behalf of a murderer, gang boss and drug lord. According to the private university in a statement, "The Coliseum is a public venue. We appreciate causes and viewpoints from all perspectives."

That too irked Safer, who now works in a private law practice in Chicago. He is critical of USC for hosting the concert, and also not happy with Amazon for airing it around the world.

"It is hard to imagine that persons who are running that university and allowing their facilities used for the benefit of this kind of a criminal know the history behind Larry Hoover" Safer told the I-Team. "The violence of the organization; the families that he's responsible for tearing apart."


Amazon did not reply to several I-Team requests for comment. Hoover's attorney has also not replied to messages left over successive days. Kanye West, who performed during a live stadium show for the first time in five years, has made his feelings publicly clear about prison reform and Hoover on numerous occasions.

In a statement punctuated by capitalized words, the performer who now goes simply by Ye stated "I Believe This Event Will Not Only Bring Awareness to Our Cause but Prove to People Everywhere How Much More We Can Accomplish When We Lay Our Pride Aside and Come Together."

Hoover has attempted to renounce his long Chicago gang ties saying that the "GD's," as the criminal group is known, actually stands for "Growth and Development" and not Gangster Disciples. However, despite the alleged conversion, federal investigators say he has continued to call the shots on behalf of the powerful gang from behind bars -- even while inside the wire at the nation's most secure prison in Florence, Colorado. In heralding last Thursday night's headliner concert, Hoover's son, Larry Jr., concluded a statement last month: "Free My Father!"

"It's bewildering. I think if we put our heads together for five minutes, we could come up with 1,000 - maybe more - causes that are more worthy to devote this kind of resources to" said Safer. "I can't for the life of me understand why this would attract this kind of attention."

The most recent statements from Chicago Judge Harry Leinenweber go to the core of Hoover's character. Hoover has not shown any regret "for the deaths he caused or show remorse for the countless drugs he put on the street, the addictions he perpetuated, and the resulting deaths of others' wives, children, and grandchildren throughout the state of Illinois and beyond," wrote Leinenweber.