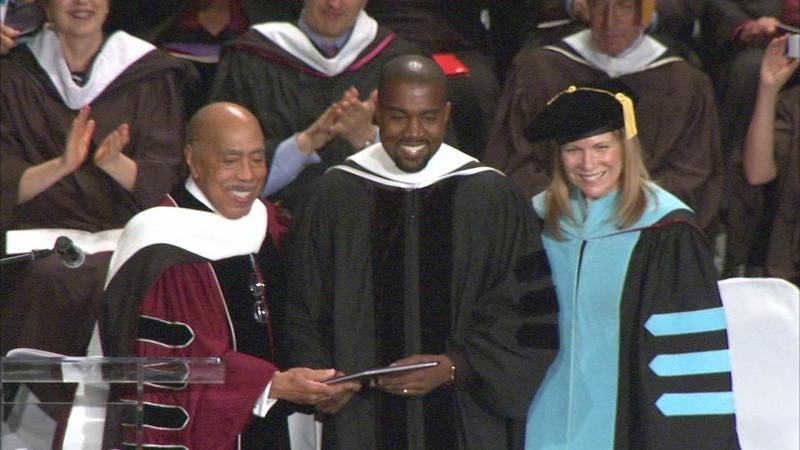 CHICAGO (WLS) -- Kanye West accepted an honorary degree Monday from the School of the Art Institute of Chicago. Now, you can call him "Dr. West".

More than 900 students graduated at the Auditorium Theatre, and rapper Kanye West joined them to pick up his own degree. Some considered him a controversial choice, but he's an undeniable influence on popular culture.

"We dig ideas, we dig crafts. Mix it up, put it forward, put it out into the world. It's your design. And this is what Kanye is all about. He's a real artist, and unafraid. He's unafraid to bring whatever he needs to his palette and put it out in front of an audience," said Lisa Wainright, Dean of Faculty, SAIC.

"Kanye's somebody I've always looked up to growing up in Chicago, so the fact that the two come together for graduation is unbelievable," said Kenrick McFarlane, SAIC graduate.

West was raised in Chicago and got back in town early enough to take in the Bulls game Sunday with Scottie Pippen. He even gave an impromptu performance during a time out. Wife Kim Kardashian didn't join him, she's in Brazil.

"My medium is public opinion and the world is my canvas," West said.

"It was alright. It was pretty mediocre," said Bobby Zehnder, SAIC graduate.

"He did a good job! He spoke about humility, so I think that was pretty polarizing for the audience," said Jennie Crichlow, SAIC graduate.

"When I went on that mission to create in other spaces - apparel, film, performance - it would have been easier if I could have said I had a degree at the Art Institute of Chicago," West said.

This is Kanye's first honorary doctorate.