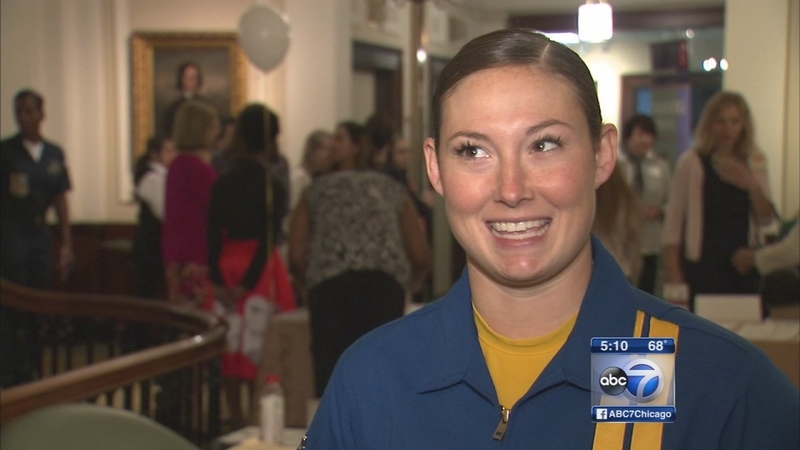 Captain Katie Higgins is the first female pilot for the Blue Angels.

Talking to Higgins, it's clear why the Marine was chosen to be a pilot for the Blue Angels flight demonstration team.

"Our mission is to inspire excellence through pride and professionalism," she said.

Higgins applied to be a Blue Angel - a rigorous process much like applying to college. And in 2014, she became the first female pilot in the squad's 70-year history. But she isn't big on taking credit for breaking barriers.

"It's definitely challenging. You have to study really hard, so no matter what your gender, it's difficult," she said.

Flying is in her blood. Both of her grandfathers and father were aviators. She tweeted a picture of grandfather holding her as a child. The third-generation pilot flies the C130, nicknamed Fat Albert, and wows crowds at airshows with stunts the Blue Angels are known for.

For her first show, Higgins says even she had butterflies.

"It was so nerve-wracking being the first female pilot, I felt like I didn't want to let anyone down. I wanted to put on the best show and show people I deserve to be here, not because of my gender," Higgins said.

But she does acknowledge that she has a special platform to reach younger generations who may not have known that being a pilot was possible. It's what brings her to Chicago as a guest of the Midtown Educational Foundation, which provides services to at-risk youth.

"The young people, fourth grade through high school seniors, all wanted to have pictures taken and learn more about what she does," said Glenn Wilke, Midtown Educational Foundation.

Captain Higgins' tour with the Blue Angels is two years and will end in November. The 29-year-old Marine will then go back to active duty, which means the possibility of being deployed.

Prior to the Blue Angels, she had two deployments - one to Afghanistan and one to Africa.