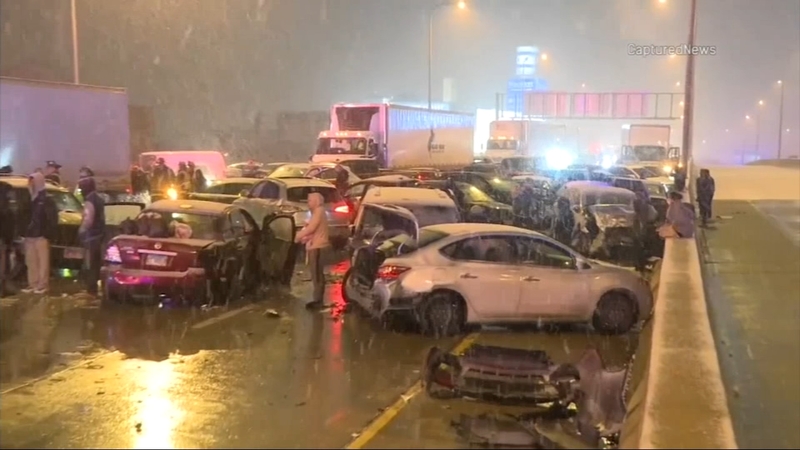 CHICAGO (WLS) -- Nearly 50 vehicles were involved in a massive pileup on the inbound Kennedy Expressway in just one of more than a dozen crashes reported Wednesday morning.

The pileup occurred around 5 a.m. at North Avenue, and involved three semis.

Fourteen people were transported to hospitals, and 45 others were evaluated at the scene, Chicago fire officials said. Crews made sure victims kept their distance, taking into consideration COVID-19 guidance.

"Social distancing, obviously is our main concern, but we have another job to do as well as far as far as fires, accidents and other things we respond to every day," said John Giordano, a CFD deputy district chief. "Aside from the pandemic that's going on, we're still dealing with everyday incidents. This is one of them."

Authorities shut down the expressway at North Avenue to clean up the crash, with at least a dozen Illinois Department of Transportation vehicles towing away cars that were not drivable. Authorities said the expressway was reopened at about 10 a.m.

Snow, mixed with falling temperatures, created a sheet of ice on the roads.

Many drivers reported untreated roads Wednesday morning, and crashes also occurred on the Stevenson and Edens.

Illinois Department of Transportation officials said during the early morning hours, they had as many as 70 trucks out salting and de-icing. While there were some slick spots on bridges and ramps, IDOT officials said they believe speed was a factor in many of the spinouts and crashes, including the pileup on the Kennedy.

"We do believe that the low traffic volumes as of late have increased speeds, resulting in many of the spinouts and crashes this morning," an IDOT spokesperson said. "In general, traffic counts have been cut in half over the last month. As a result, speeds on the expressways have been very high and traffic moving too fast for conditions."

"Overnight conditions deteriorated and we got some snow and icy conditions on the expressway; vehicles driving at high rates of speed caused the accident," Giordano said. "We are not sure the vehicles that caused it, but it did cause an effect where vehicles couldn't stop behind them because of the high speeds that they were traveling and thus the amount of vehicles we have at this time."

Patrick Balson works for a company making ventilators. Considered an essential worker, he was on his way to work in Cicero.

His car is totaled.

More than a dozen other crashes were reported on Chicago-area expressways, including a multi-vehicle crash on the Stevenson Expressway near Damen Avenue. No serious injuries were reported in the crash.

In a statement, an IDOT spokesperson said, "IDOT crews were called in at 1:30 this morning and those numbers escalated as the forecast changed and the event intensified. At one point, IDOT had approximately 70 trucks on the roads, spreading salt and de-icing material. They were joined by Emergency Traffic Patrol responding to incidents.

"In areas that were hardest hit, i.e. the Kennedy Expressway and northwest part of the city, we had a full complement of personnel and equipment on the roads. This was an appropriate response for the department for a weather event of this magnitude at this time of year.

"While the storm did not result in a lot of snow, because of the low temperatures, wet conditions created many scattered slick spots and black ice - especially on bridges and ramps, as was the case on the Kennedy Expressway at North Avenue.

"We do believe that the low traffic volumes as of late have increased speeds, resulting in many of the spinouts and crashes this morning. In general, traffic counts have been cut in half over the last month. As a result, speeds on the expressways have been very high and traffic moving too fast for conditions. By contrast, we saw very few issues this morning on arterial streets where the speeds are much lower.

"Winter weather is in the forecast yet this week. We will be closely monitoring and responding as necessary, but we ask for the public's cooperation if they are driving to check conditions in advance at GettingAroundIllinois.com and SLOW DOWN. As a reminder, roads that appear wet can, in fact, be very slippery."