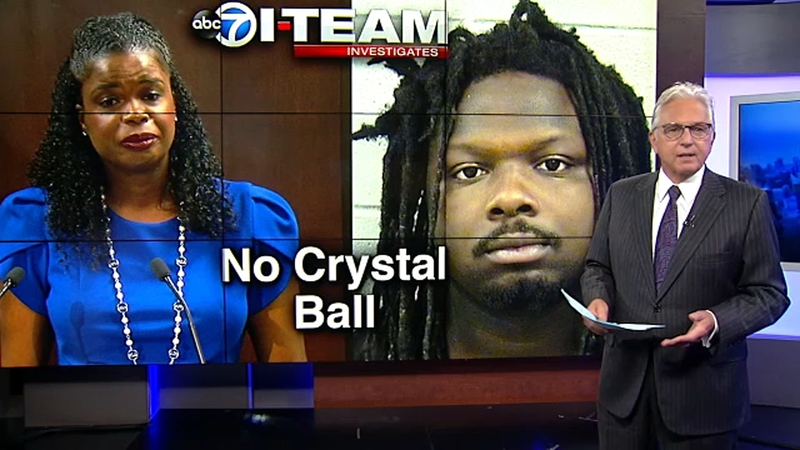 CHICAGO (WLS) -- Defending her decision not to pursue a stiff sentence against a juvenile killer, Cook County State's Attorney Kim Foxx says such choices are "not based on crystal balls."

Dionte Johnson was 14 years old in 2009 when he helped beat to death a Fenger High School student in a daylight attack. Video of the brutal murder of Derrion Albert, 16, was seen around the world.

Johnson received a 30-year sentence but because he was a juvenile was allowed to remain free-as long as he committed no other crimes. In 2015 he was arrested again for fleeing police. But as the I-Team first reported, State's Attorney Foxx opted not to pursue the 30-year sentence allowed under the law.

Sunday, Johnson was arrested yet again-also running from police-but this time with a fully loaded 9mm pistol, according to the new charges.

"In terms of the ability to say that we could foresee six years ago what a 14 year old would be where we are today-we could not foresee that" said the state's attorney at an unrelated Tuesday morning event. "Given his arrest this weekend, this is someone who has had the opportunity to utilize the juvenile court system-utilize the resources that were available-and chose to engage in behavior that has brought him back before us" Foxx said.

Johnson is now being held without bond in the Cook County jail. Foxx said that she supports the no-bond order for Johnson, now 24.

The convicted killer's latest criminal encounter with Chicago police came as officers spotted him fidgeting with something in the waistband of his pants. When far South Side officers stopped to frisk Johnson they say he ran. During a brief chase he allegedly tossed a 9mm pistol along the way; a gun that prosecutors say was recovered.

He is now charged with unlawful use of a weapon, a felony. Johnson's latest brush with the law has resurrected questions about why the prosecutors didn't press for that full 30-year sentence when they could have.

"In that particular case this was someone who was charged as a juvenile, was part of the juvenile statute, and was given a sentence previously that would have allowed him to be sentenced as an adult should he have had any other infractions. Based on the previous infraction we did not believe that it merited the sentence that would have been given."
Report a correction or typo
Related topics:
cook countychicagoroselandi teamkim foxx
Copyright © 2022 WLS-TV. All Rights Reserved.
I-TEAM
Cross-border drug tunnel linked to alleged drug trafficking scheme
I-Team: State Police Target Expressway Shootings
Teen fatally shot at 'Bean' worried about living past 21
How to protect yourself from moving company scams
TOP STORIES
Cook County announces guaranteed income pilot program
Toddler orders 31 McDonald's cheeseburgers on mom's DoorDash app
4 students hurt when chemistry experiment goes awry: fire marshal
Update on Delphi murders: New docs say crime scene tampered with
1st monkeypox case in US this year reported in Massachusetts
West suburban mayor arrested for DUI, was asleep on expressway: police
Biden invokes Defense Production Act for formula shortage
Show More
Stocks plunge as Target's woes renew inflation fears
Chicago Weather: Cloudy early, clearing late
US Soccer reaches equal pay agreement for men's, women's teams
Illinois reports 5,763 new COVID cases, 11 deaths
Mother scolded by judge after gun goes off in son's backpack
More TOP STORIES News