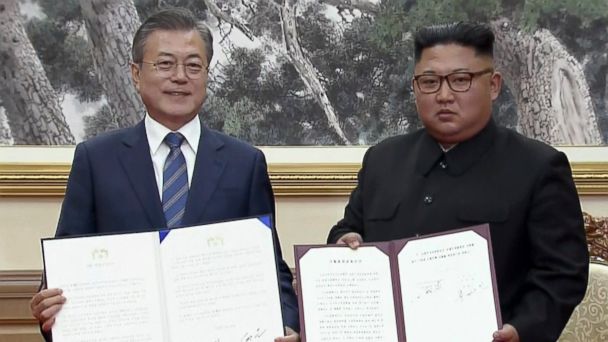 SEOUL, South Korea -- North and South Korea issued a joint statement Wednesday laying out more steps North Korea is prepared to take to denuclearize, but offering few details as to how they will get there.

North Korean leader Kim Jong Un pledged to permanently shut down the Tongchang-ri missile launch and engine testing facilities with independent inspectors present. Kim also said he is prepared to permanently shut down his nuclear production facility at Yongbyon, but only if the U.S. takes "reciprocal steps" in the spirit of the June 12 agreement signed by U.S. President Donald Trump.

It was unclear what those "reciprocal steps" would be.

Trump excitedly responded to the agreement in a pair of tweets late Tuesday. He said that Kim had allowed nuclear inspections "subject to final negotiations" -- an agreement not mentioned by the Koreas Wednesday -- and highlighted that the two Koreas will also submit a bid to host the 2032 Summer Olympics. He did not shed further light on what the U.S.'s reciprocal steps would be either.

"The core matter is the removal and storage of existing spent fuel rods when the North purportedly would shut everything down," Jinwoo Kim, adjunct professor at the Graduate School of Political Studies at Kyonggi University, told ABC News. "Unless shipped out of the country or pried away from North Korea's control, they remain a big problem."

The Koreas also agreed to work toward easing military tensions on the Korean peninsula, increasing communication and cooperation and facilitating more family reunions.

Kim promised he "will visit Seoul in the near future," and Moon Jae-in commented Kim would be the first North Korean leader to visit the South.

"This summit contributed in breaking down walls between Koreas -- a real process for both North and South Koreans," John Delury, a North Korea expert at Seoul-based Yonsei University, told ABC News. "People want something new. Obviously Kim coming to Seoul is new."

The joint statement signed by the countries' military chiefs on Wednesday said the Koreas will aim to remove the mines in the Joint Security Area in the truce village of Panmunjom in October and also remove guard posts from the area.

The guesthouse is the same location where former South Korean Presidents Kim Dae-jung and Roh Moo-hyun stayed during the inter-Korean summit talks with late North Korean leader Kim Jong Il in 2000 and 2007, respectively.

The South's delegation's was served lunch at Okryugwan, a Pyongyang restaurant famous for its cold noodles. Moon was scheduled to visit facilities related to science and technology in and around Pyongyang city Wednesday afternoon. A farewell dinner banquet will follow.

Moon will visit Mount Paektu with Kim Jong Un Thursday morning, South Korea's presidential office announced. The volcano is considered sacred and Moon said during the April inter-Korean summit it was his longtime dream to go trekking on the mountain.

After the hike, Moon is expected to return to Seoul from Samjiyon Airport.

Moon and his 150-member delegation arrived in Pyongyang on Tuesday, greeted by Kim and his wife with much flag-waving and music followed by a fancy car parade through Pyongyang's streets.

After a closed-door summit, the South's delegation, including top business executives and musicians, joined Kim and North Korean officials at Pyongyang Grand Theatre for an orchestral performance by the North's Samjiyon orchestra.

The dinner banquet that followed was amicable throughout the whole three hours, officials said, with it wrapping up past 11 p.m.