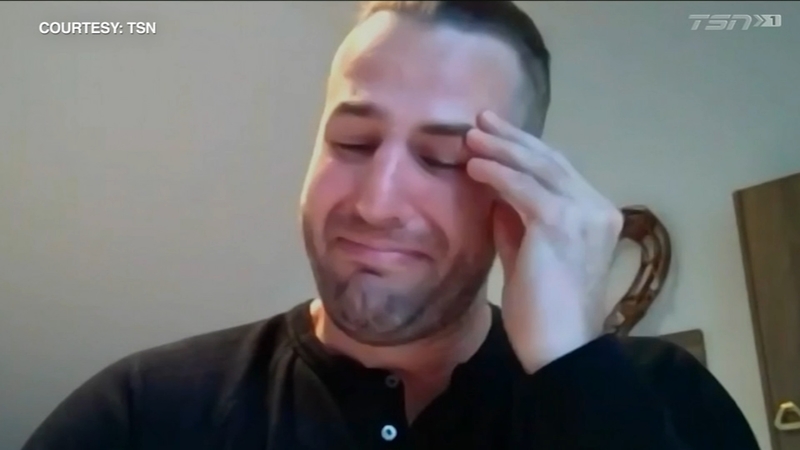 CHICAGO (WLS) -- The former Chicago Blackhawks player at the center of the sexual assault investigation that unraveled the team's front office spoke out for the first time Wednesday.

Kyle Beach, 31, was drafted by the Blackhawks in 2008. He chose to speak out about what happened to him.

Beach came forward and asked that his identity be revealed on TSN in Canada. He spoke about the last decade of his life, and shared an emotional message to victims of sexual abuse.

"I know I'm not the only one," Beach said. "Male or female. And I buried this for 10 years. 11 years. And it's destroyed me, from the inside out. And I want everyone in the sports world, and the world, to know that you're not alone."

The Blackhawks released details of an independent investigation Tuesday that found the organization waited three weeks during their Stanley Cup season in 2010 to look into allegations by Beach that Coach Brad Aldrich sexually assaulted him.

The report also said the team allowed Aldrich to continue working, and even allowed him to take the stage at the massive Grant Park rally after they won the championship.

Aldrich would leave the team after the Stanley Cup celebration, eventually heading back to his hometown where he was convicted of sexual abuse of a minor in 2013, for assaulting a 16-year-old high school player. Aldrich is now a registered sex offender in Michigan.

"And then in 2013 he wound up in Houghton, Michigan. Where he wound up sexually assaulting a 16-year-old player. And I wonder, if he's watching, what you're message to him is?" Westhead asked.

"I'm sorry," Beach said. "I'm sorry I didn't do more when I could. To make sure it didn't happen to him. To protect him."

A months-long independent investigation has verified the allegations which were first made during the Hawks' Stanley Cup run in 2010. The team's general manager and president, Stan Bowman, resigned Tuesday and the club is being fined $2 million.

The Blackhawks issued a statement Wednesday saying, in part, "We would like acknowledge and commend Kyle Beach's courage in coming forward. Our deepest apologies to him for what he has gone through and the organization's failure to promptly respond when he bravely brought this matter to light in 2010. No playoff game or championship is more important than protecting our players from predatory behavior."

A statement from the Chicago Blackhawks pic.twitter.com/x1XbMXDiyA

The team said numerous changes have been implemented within the organization.

Fans were shaken by the Blackhawks sex assault report, and sympathetic to Kyle Beach for bravely speaking out.

Fans shuffled into the United Center for the Blackhawks game against the Toronto Maple Leafs, but many are also still reeling from the revelations in Tuesday's report.

"I read the report when it came out," said fan Aaron Mesa. "I was a little sickened by the report, and everything that happened."

"It just really breaks my heart to see that stuff happened. Especially with an NHL dynasty like the Blackhawks," said fan Chris Sellers.

A number of fans said they had already seen parts of Beach's interview.

"It's unfortunate people need to speak up about these things. I'm glad someone spoke up, brought it to light," said Kevin Patel, fan.

Most fans said the Hawks were right to make changes in management following the report, but many said it should have happened long before now.