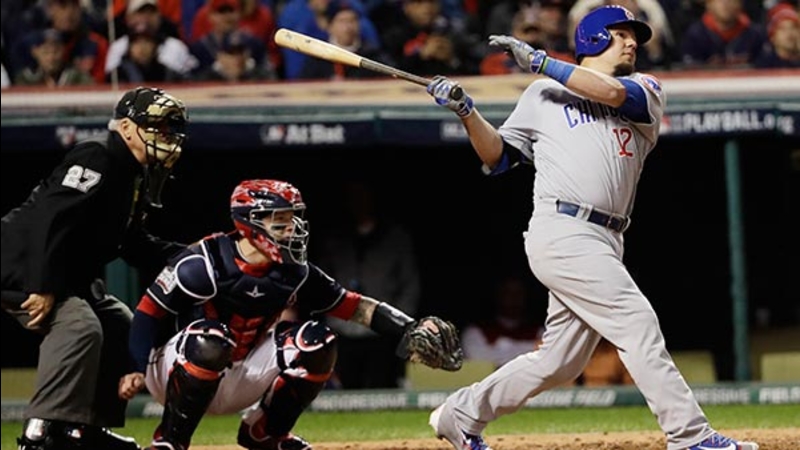 CHICAGO (WLS) -- The Chicago Cubs lost to the Cleveland Indians 6-0 in the first game of the World Series.

Major League Baseball moved the time of Game 2 of the World Series up one hour due to expected rain. Game 2 will now start at 6:08 p.m. CST.

Kyle Schwarber, who tore two ligaments in his knee at the beginning of the season and was expected to be out for the entire year, returned to the Cubs as the designated hitter for World Series Game 1 against the Cleveland Indians Tuesday.

Corey Kluber got the Cleveland Indians off to a great start and Roberto Perez finished off the Chicago Cubs in their first World Series game since 1945.

Kluber pitched neatly into the seventh inning, Perez hit two home runs. AL Championship Series MVP Andrew Miller escaped a bases-loaded, no-out jam in the seventh and got out of trouble in the eighth, preserving a 3-0 lead.

In a matchup between the teams with baseball's longest championship droughts, the Indians scored twice in the first inning off October ace Jon Lester and were on their way.

Perez drove in four runs - he became the first No. 9 batter to homer twice in a Series game, and the first Indians player to accomplish the feat. He hit a three-run drive to put it away.

Francisco Lindor added three hits, helping Cleveland manager Terry Francona to improve to 9-0 in the Series. Francona's success includes sweeps by his Boston teams in 2004 and '07.

The Game 1 winner has taken the title in the last six Series and 17 of 19.

Trevor Bauer, trying to come back from a sliced pinkie, starts Game 2 for the Indians on Wednesday night against Jake Arrieta.

Kluber struck out eight in the first three innings. He combined with Miller and Cody Allen to fan 15.

With the Indians hoping for their first title since 1948 and the Cubs seeking their first since 1908, Lester stumbled in the opening inning. Cleveland loaded the bases with two outs, Jose Ramirez had a run-scoring swinging bunt single and Brandon Guyer was hit by a pitch.


Plenty of Cubs fans were in Cleveland and wearing Cubbie blue inside Progressive Field. Rochelle and Donnie Hopson from Gary, Ind., are overwhelmed with joy to be there. Rochelle's brother lives there and the family rivalry is real.

"We've got a watch party going on at my brother's, although we got kicked out so that's why we're here right now. There was a sign, 'Cubs fans stay out,'" she said, laughing.

Their excitement was contagious.

"It's awesome. It's just amazing to be here, doesn't matter if we have tickets or not," Rochelle said.

Brandon Theodore is attending his 17th World Series overall, though he wasn't optimistic at the beginning of the season.

Theodore was in Cleveland with his friends Ralph and John Russo, who are thinking of loved ones who didn't live to see this day.

"Fantastic, once-in-a-lifetime experience. I wish my dad would have been alive to be here," Ralph said.

"Just watching the TV, cursing out the TV, hoping they would win and we're here today. It means a lot, and even more to the city, too," John said.

And something strange happened to Ralph Tuesday; he found a coin on the ground.

There was a heavy police presence in Wrigleyville even though the Cubs are on the road, as fans turned out in droves to watch their team play in the World Series.

These fans were making a lot of noise before the game, but there hasn't been much to cheer about all night.

There was a heavy police presence in Wrigleyville even though the Cubs are on the road, as fans turned out in droves to watch their team play in the World Series. Bars were busy.

"It's really special. It's a great community that's coming together, and I'm just loving it," said fan Kelly Stapleton.

A couple miles south on Clark, Indians fans gathered at The Field House in Lincoln Park. The self-proclaimed Cleveland bar was a sanctuary for Ohio transplants.

Jordan Tasse is going to Cleveland for Game 2 just to get out of the dog house.

"My wife, her whole family, they're about as big a Cubs fan as you can get, so I've been getting about a hundred text messages a day," Tasse said.

In Wrigleyville, Cubs fans hope Game 1 is a step towards a World Series title.

"I want it all. I think Chicago, the Cubs, our fans, now we want it all," said Will Byington.

There was a big crowd Murphy's Bleachers, which actually removed all tables and stools from this first floor area to make more room. Other bars are reportedly taking similar measures.

With the Cubs in the World Series, Wrigleyville is experiencing a mini economic boom.

While the first games of the World Series are taking place about 350 miles away, but the fans flocking to Wrigley Field to take pictures and buy souvenirs are providing Wrigleyville with a mini economic boom.

There is lots of money being spent, even by a White Sox fan who bought a couple hundred dollars' worth of Cubs gear for his daughter in Florida.

"My last game was in 1947 when Phil Cavaretta was playing first base. That's the last time I went to a Cubs game," said Bob Solczyk.

The Cubs fever fueled by the World Series means big profits for businesses and bars in the area. According to Maureen Martino, with the Lakeview East Chamber of Commerce, tourists are still coming to the city when there would normally be a drop-off after the Chicago marathon.

"People just want to be here. Just besides a regular baseball series, but the World Series is something that everybody has been waiting for," Martino said.

People also flock to bars to watch the games, but some owners said they should be prepared to pay more to get in. Prices will be noticeably higher for the home games this weekend. For instance, at John Barleycorn it will cost $250 to get in and another $500 to reserve a table. Owner Sam Sanchez said it's normal and actually helps with crowd control.

"You go to the World Cup, even the Super Bowl, all the prices, hotels, ubers, taxis, they all adjust," Sanchez said.

WE AIN'T AFRAID OF NO GOATS
EMBED More News Videos

We ain't afraid of no goats! That didn't stop a pair of Cleveland Indians from trying the old goat curse trick, though.

Two Cleveland Indian fans took a pair of familiar animals out for a stroll around Progressive Field. Yup, goats: Dexter and Tug.

"We had to bring them down today to show a little love to the Tribe and make sure everyone knows the curse of the goat is going strong," said Heather Kovach.

Heather and James Kovach own a goat farm and, obviously, are Indians fans. As such, their understanding of the so-called curse may have been a little limited, so we tried to warn them about this sort of thing. They were unfazed.

Cubs fans let it roll of their backs.

"Did we see the goat? We took a picture with that goat!" said Ralph Russo.

A Chicago after-school program is auctioning two pairs of front-row seats for Game 3 on eBay.

Off the Street Club offers tutoring and mentoring for youth in West Garfield Park, one of the city's most dangerous neighborhoods.

The four tickets are for seats behind the Cubs dugout. Tuesday afternoon, about 40 bids had raised the value of each set to $10,600.

To bid on the tickets, visit: http://www.ebay.com/rpp/charityshop/cubs-tickets

For more about the Off the Street Club, visit https://www.facebook.com/OTSC/

"Jimmy Kimmel Live" had a special guest Monday night. Holy cow, it was Harry Caray! Well actually, it was actor Will Ferrell. He channeled one of his favorite characters once again, in honor of the Cubs. Kimmel tweeted out a photo of himself, Ferrell and President Obama the main guest.