WLS
By Craig Wall
KILDEER, Ill. (WLS) -- A controversial giveaway in the northwest suburbs on Friday night. Lake County Republicans threw a fundraiser where firearms were the raffle prize for donors.

This comes less than two weeks after the deadliest mass shooting in modern U.S. history in Las Vegas.

There were a couple dozen protesters were outside the banquet hall where the fundraiser was held.

Organizers did not feel the need to cancel the event but that does not mean they are insensitive to what happened in Las Vegas.

Inside the Concord Banquet Hall in Kildeer, Lake County Republicans gathered for a fundraiser and, during the course of the evening, raffled off at least a dozen guns. It's part of what's being called a celebration of the Second Amendment.

"When it was brought to me, it was stunning, the thought of having this so shortly after what happened in Las Vegas, I mean you still have a lot of families grieving," said Lake County Democratic Party Chairman and State Senator Terry Link.

Party members said they have been planning the event for a year and cancelling wasn't possible.

"We obviously don't know when a good time would be to have an event, obviously the people that think that it's too soon, I'd be interested to here when they think would be a better date. But it's not possible to cancel something like this at the last minute. You would lose all the deposits and stuff like that," said Lake County Republican Party Chairman Mark Shaw.

Shaw said the party is very sympathetic to the victims of the shooting in Las Vegas that left 58 people dead when a gunman opened fire on concertgoers outside a hotel.

That has once again raised concerns in some political circles about the need for some restrictions on gun rights, particularly devices that can enable semi-automatic weapons to be fired like automatic ones.

One of the top prizes from the raffle is an AR-15 assault rifle.

"It's one thing getting a shotgun to go duck hunting or pheasant hunting that's one person's prerogative if they're a law abiding citizen, but there's no reason for these AR-K's," said Sen. Link.

"They can celebrate the Second Amendment all they want, they don't have to give away an assault rifle," said protester Patt Heise.

Former Congressman Joe Walsh is the event's keynote speaker. He bristles at those who criticize the raffle of legal guns.

"Imagine somebody in Las Vegas took a pickup truck and ran over and killed 58 people. And imagine we were going to have a dinner and give away a pickup truck. Should we not do that because it's insensitive to what happened a couple of weeks ago?" said former Illinois Congressman Joe Walsh.

This event was originally planned for 200 people but the head of the Lake County Republican Party said since the controversy has erupted even more people have expressed an interest in coming.
Report a correction or typo
Related topics:
lake countyrepublicansweaponssecond amendmentfundraiserguns
Copyright © 2021 WLS-TV. All Rights Reserved.
RELATED 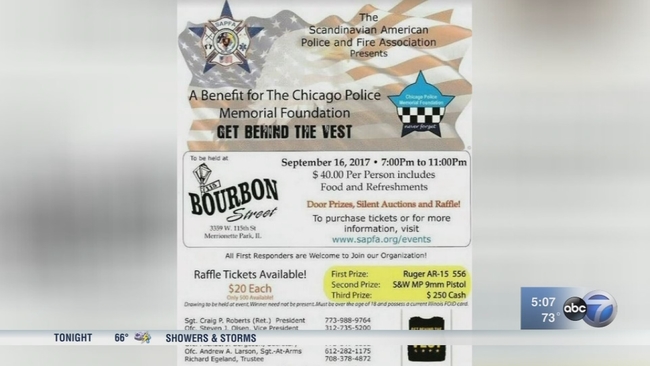