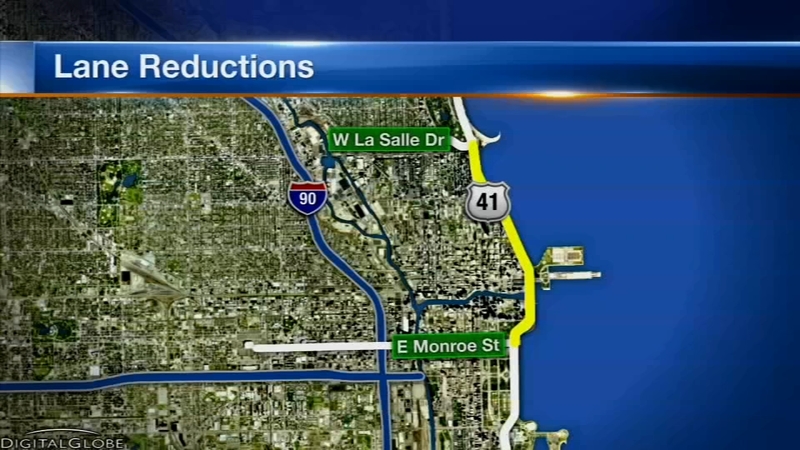 Closures will reduce Lake Shore Drive to two lanes in each direction from South Monroe to LaSalle Drive.

Get a birds-eye view of the repaving project underway on Lake Shore Drive from the ABC7 Drone Cam.

The Chicago Department of Transportation started the project Sunday. Crews will resurface North Lake Shore Drive from Monroe to Grand Avenue and make repairs to the bridge that carries Lake Shore Drive over to LaSalle Drive.

The city plans to have all of this work complete by October 6, just in time for the Chicago Marathon.

It's won't be easy for commuters for the next few weeks, but city officials said crews will be working double shifts so they can get this done as early as possible.

"We want to encourage people as much as possible to use alternate routes," said CDOT Deputy Commissioner and Chief Engineer Dan Burke. "Use public transportation if it's an option. If you have to drive, please stay off the drive is possible. Use (I-90/94) or other routes and if possible consider biking. The weather is beautiful. It's a viable option for you."

The work will be done in phases. You may see some inner lanes closed for part of this and then some outer lanes.

CDOT said it's very important to get this work done now as the drive is in poor condition and they want it done before winter comes.

Regardless, drivers were frustrated on Monday.

"It was really bad!" said motorist Francisco Estrada. "It took me 45 minutes to get through one mile."

"Considering I'm getting off now, it's wonderful!" said motorist Adonya Collins. "I can say it's not too bad. I was expecting worse."