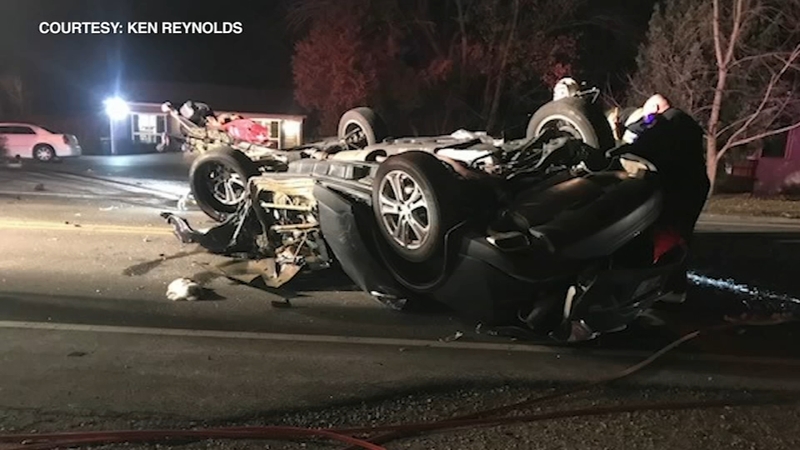 UNINCORPORATED LAKE VILLA, Ill. (WLS) -- A woman and a baby boy were killed in a three-car crash in unincorporated Lake Villa Thursday night that left four others, including a toddler, injured, the Lake County Sheriff's Office said.

Deputies responded to the crash on Route 59 near West Beach Avenue at about 5:20 p.m. and found three vehicles heavily damaged.

Police said a woman driving a Nissan SUV was traveling north on Route 59 while a man driving a Ford pickup and pulling a trailer attempted to merge from the east side shoulder of Route 59 into the northbound lanes of Route 59.

The front of the Nissan struck the Ford, which police said caused it to roll. The Nissan then slid and was struck by a Hyundai minivan.

The woman driving the Nissan and a 1-year-old boy who was a passenger in the vehicle were both pronounced dead at the scene. Authorities have not released their identities.

A 3-year-old girl who was a passenger in the Nissan was airlifted to Advocate Lutheran General Hospital in Park Ridge in critical condition, the sheriff's office said.

The crash occurred right in front of Ken Reynolds' auto shop. He immediately ran and attempted to help the woman in the Nissan.

"I told her, 'Just hang in there, just hang in there. Help is on the way. The fire department and ambulance are coming, just stay in there with me. Just try to hang on,'" he said. "It didn't look good from the start."

Two of his employees also rushed to the victims' aid.

"The first thing I thought of was to call 911, get somebody on the way as soon as possible," said Eric Jones, good Samaritan. "It was something I never seen before. It was crazy."

"Once we found out there were kids in the car, it took it to another level," said Reynolds. "You could tell the lady was trying to hang on, but there was nothing we could do."

The driver of the Hyundai and his son, who authorities described as a teenager, were both transported to Advocate Condell Medical Center in Libertyville.

The driver of the Ford was transported to Advocate Condell Medical Center with non-life-threatening injuries.

While the investigation will take weeks, the good Samaritans said the emotions of trying to help, trying to save this family, are raw and painful.

"When I got home, my son was in the back room and ran to me. I held him for like 30 minutes," Jones said. "It's rough... especially when you got kids."

"Tomorrow is never promised to us, so you got to hold your loved ones close to you," said David.