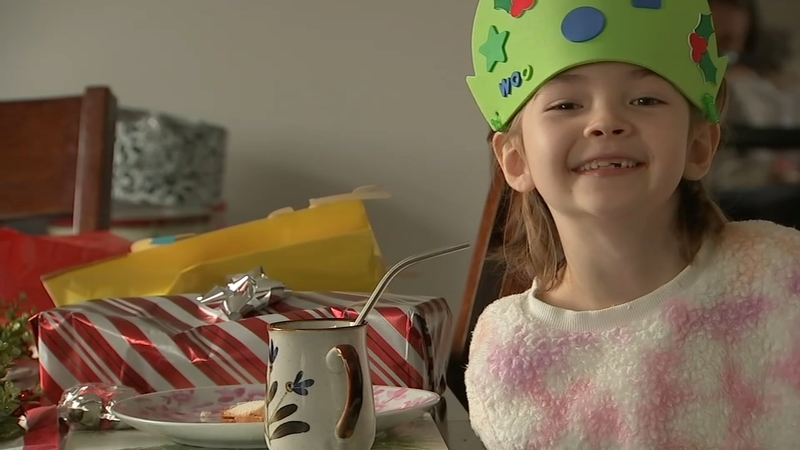 LAKE ZURICH, Ill. (WLS) -- Toys and more toys. Just hours before this Lake Zurich family is scheduled to drive down to tornado ravaged Kentucky the donations are still coming in. It all started with a video of 6-year-old Teaghan Croteau posted to Facebook a week ago.

"Their houses and their presents and their Christmas trees are gone, so in this box, make sure to put toys, or anything that you want that makes them have a good Christmas," said Croteau in a Facebook video.

"She's at that age when she needs to know what the holiday season is really about," said her mom Brianne Croateu. "It's not just about receiving but giving to those in need. And she's just taken it and brought it to a whole new level and it's such a beautiful thing to witness."

A first grader at Holy Family Catholic Academy, Teaghan, started collecting from her neighbors but quickly got her school involved as well.

"I told my teacher and she said I can bring a box there and now, there's a lot of toys in the box now," said Teghan.

Between 300 to 400 toys is what the Croteau's believe they will be driving down to Mayfield tonight. Needless to say, their effort has been accompanied by several days of gift wrapping and sorting. For a while however, finding a specific destination for all these toys, posed the bigger logistical challenge. With such widespread destruction even the traditional avenues have been hard to get in touch with.

"They're doing floats tomorrow afternoon. They're going to run them down the downtown area of Mayfield, they were able to get the debris off the streets, said dad Chris Croteau. "They're going to let all the kids from the surrounding communities just come and take whatever they want."