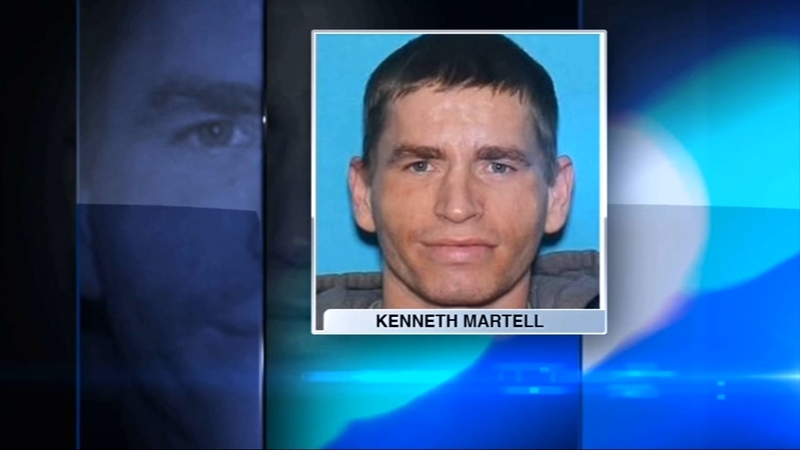 LAKEMOOR, Ill. (WLS) -- Investigators have confirmed 36-year-old Kenneth Martell, the man shot and killed by Lakemoor police Thursday morning was wanted for the killing of an 88-year-old man in Pennsylvania earlier this week.

Martell allegedly pulled two guns on north suburban Lakemoor police and was then fatally shot by a police officer.

"Still working to try to figure out why he was here. Was he here taking a rest before he continued his travels or was there something specific that brought him to this area," said Sgt. Chris Covelli, Lake County Sheriff's Department Public Information Officer who spoke on behalf of the Lake County Major Crimes Task Force.

Just after 5 a.m., a female police officer approached a 2011 Kia Sorento parked on a gravel road near the Lakemoor Golf Course, police said.

A man later identified as Martell was asleep in the vehicle. She had no idea the man was on the run from police.

Covelli said the officer approached the vehicle and made contact with the Martell who was inside the car.

"During their encounter at some point as we understand it the adult male produced a firearm there was some sort of struggle that occurred over this firearm," said Covelli.

When another officer arrived on scene, they say Martell showed a second gun. Investigators say at least one Lakemoor police officer fired their weapon, striking Martell in the face.

"The offender was subsequently pronounced dead here at the scene," said Covelli.

The officers involved learned of the possible Pennsylvania connection shortly after that.

"She was informed that there was a note on the license plate that the individual operating the car could be involved with a homicide in Pennsylvania," said Covelli.

This is believed to be the first police-involved shooting in Lakemoor.

"Two firearms were recovered from the offender's possession," said Covelli.

"I talked to just one neighbor and they were just as surprised about it as I was. Mostly whoever this person was just travelling through our community and it happened," said Lakemoor resident Alan Weiss.

Covelli said he could not confirm whether the suspect ever fired shots.

There is bodycam footage of the incident.

The officers involved in the shooting were transported to a hospital for evaluation.