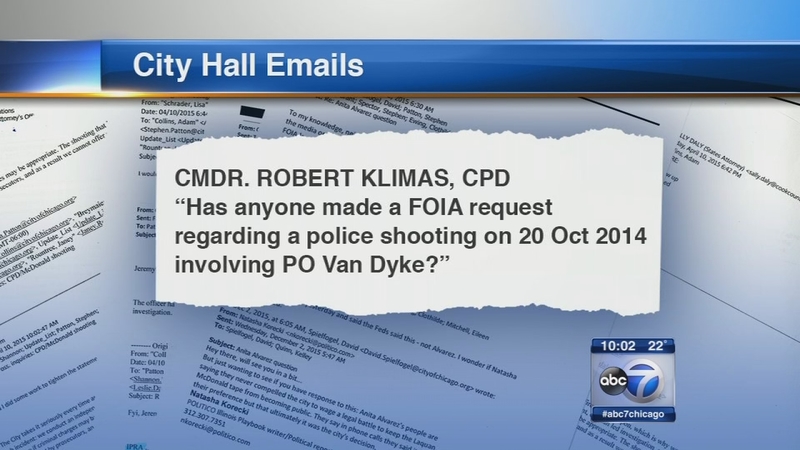 CHICAGO (WLS) -- Hundreds of emails related to the fatal shooting of a black teenager by a white Chicago police officer were released Thursday.

ABC7 reporters and producers sorted through those emails, including some in which officials discuss how to respond to requests to release police dash-cam video of the shooting. Documents including settlement records and autopsy reports were also included in the file.

Those emails do not reveal any direct cover-up by the mayor or his office, but at a time when the city faces various challenges, they do reveal just how much time, energy, and resources were spent on a losing battle to keep that video under wraps. Less than a month after the shooting, the internal affairs chief of the Chicago Police Department wrote to staff, "Has anyone made a FOIA (Freedom of Information Act) request regarding a police shooting on 20 Oct 2014 involving PO Van Dyke?"

The answer passed along to then Chicago Police Superintendent Garry McCarthy's chief of staff was, "No news organizations have FOIA'd it."

In the months that followed, requests for the video were denied citing the ongoing investigation by the civilian- led Independent Police Review Authority (IPRA). However, emails suggest IPRA was anything but independent from the offices of the mayor and Cook County's state's attorney. Multiple emails show information sharing, including links to media reports about the McDonald case, between the former IPRA head Scott Ando and members of the mayor's staff. In at least one case, a press statement attributed to the IPRA appears to have been crafted by the mayor's office.

In April, with the city moving toward a settlement with the McDonald family, staffer Adam Collins suggests in an email to others in the mayor's office, "I think we should point any inquiries to IPRA..." It's followed by a first draft of a statement saying prosecutors are investigating and IPRA cannot comment further.

The following day, Collins writes, "Clo and I did some work to tighten the statement. Any issues with this?"

That was followed by a second draft that is forwarded to staffers, the city attorney, and the state's attorney's press person. After all parties signed off on the statement, Collins writes, "... the Tribune just asked IPRA about the McDonald settlement. IPRA is giving him the statement we approved."

In the thousands of pages of emails, few are written to or by Chicago Mayor Rahm Emanuel, who's referred to by staff as MRE and REMOC (Rahm-Emanuel-Mayor-of-Chicago). Nothing indicates the mayor saw the police shooting video or was directly involved in fighting its release.

On April 16, staffer Clo Ewing wrote "... is there value in making clear that the mayor wants the video out as well."

Collins wrote, "... I' not sure we want to insert him into any more than he already is. I feel like we do better leaving it as a law issue."

With pressure to release the video building, staffers were also concerned about how to handle the fallout. One staffer suggested "...the Mayor and some community leaders such as Fr. Pfleger lead a peaceful demonstration..."

The response, "Not a bad idea. We have five days to build community buy in and dialogue. We shouldn't waste a second."

The video of Laquan McDonald, 17, getting shot to death by Chicago Police Officer Jason Van Dyke was withheld from the public for more than a year. It's release was forced by a judge, as described in another email by staffer Janey Rountree to her colleagues.

"We were relying on an exception to the FOIA law that allows us to withhold evidence in a pending investigation- in this case our own IPRA investigation."

The City of Chicago said through a statement Thursday afternoon, "Every city department provides updates to the policy liaison in the mayor's office as a course of business, in this case it was a status update on cases that were being reviewed by prosecutors for possible criminal investigation. The mayor's office does not direct investigations, nor are any employees involved in those investigations."

Van Dyke was charged with murder 13 months after the shooting and just before the video was released to the public. The Chicago Police Department and Mayor Rahm Emanuel have come under scrutiny over the use of force and how the investigation was handled.

Protesters are calling for changes within the CPD and the resignation of Emanuel, as well as Cook County State's Attorney Anita Alvarez. The U.S. Department of Justice is investigating the use of force within the Chicago Police Department and McCarthy resigned as superintendent.

The city released the files the day after Emanuel announced de-escalation training and the addition of stun guns to squad cars.

Van Dyke pleaded not guilty to the charges earlier this week.

Hours after ABC7 received the McDonald emails, the CPD denied a request for documents related to another deadly police shooting. Yet again, the city cited the Independent Police Review Authority's investigation as the reason to withhold information related to the shooting deaths of Quintonio Legrier, 19, and Bettie Jones, 55. Police said Jones was shot accidentally.