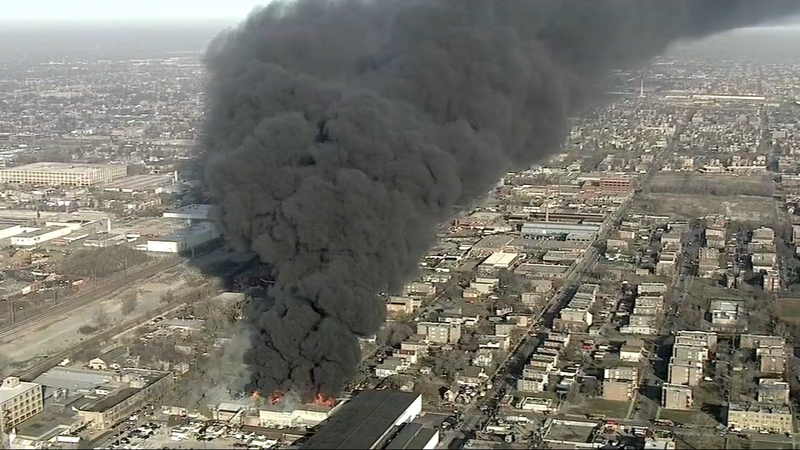 "We could be lieve it," said Blanca Valderas, witness. "We were like in shock."

The 4-11 alarm fire broke out an auto body supply factory at 4425 W. 16th. Street at about 8:45 a.m., as many workers at the Best Value Auto Body Supply had already started their shifts.

Chopper 7HD flew over the scene as huge flames and thick smoke could be seen coming from the warehouse.

Chicago firefighters battle huge flames and thick smoke from an extra-alarm warehouse fire on the West Side.

Gloria Ramos, whose husband Raoul has worked at the plant for years, said he frantically called her as flames began to overtake the building.

"He said one of the supervisors said there was a fire. They smelled fire on the inside," she recalled.

Chicago Fire Assistant Deputy Fire Commissioner for Operations Barry Garr said it was "200 feet of fire going down the block" when he arrived on the scene.

Smoke from the fire could be seen as far away as Schaumburg. The fire was struck shortly after noon.

Calls to 911 for help summoned about 250 firefighters and their engines to the scene.

"Once I seen everyone running from the warehouse, they were going upstairs to check what was going on and then we started seeing a lot of smoke," said warehouse worker Brenda Vidal. "So they just said everyone to get out of the building."

Employees who were in the front office said they smelled smoke but could not locate the source of it.

They went onto second floor and checked out roof but did not see anything. Shortly after that, they evacuated to see smoke and flames billow from the warehouse.

"Christmas is coming up and it's like 'What are we going to do with our jobs?'" said employee Karol Coca.

The source the blaze is still unclear, and the CFD's office of fire investigation is focusing its attention on a back room of the warehouse and on the building's roof.

Workers said about 50 people in the building at the time the fire broke out.