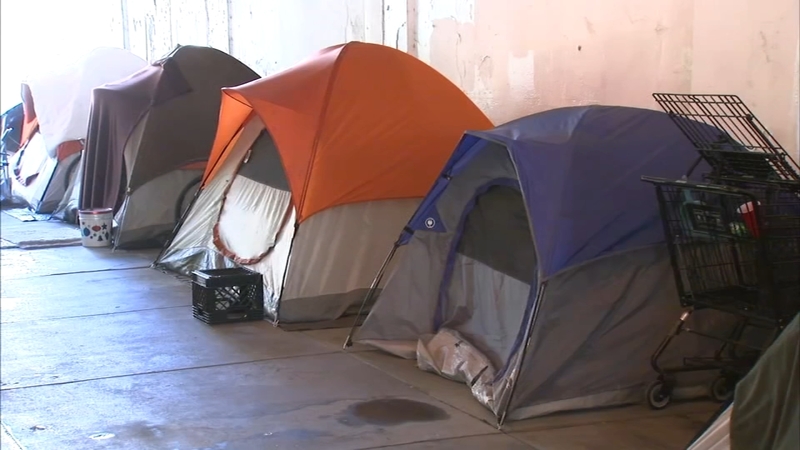 CHICAGO (WLS) -- The homeless residents of the Wilson and Lawrence viaducts are vowing not to quit after a Cook County judge delayed ruling on whether to dismiss their discrimination lawsuit against the city of Chicago.

The former encampments under Lake Shore Drive in Uptown were widely known as tent city. In this most recent lawsuit, filed in August of last year, the plaintiffs and their attorneys accuse the city of illegally targeting the homeless by concocting a plan to install bike lanes on the sidewalk, resulting in not enough space for them to reside in their makeshift tents.

"Regardless of today's outcome, we are going to continue to fight the city when they choose to operate outside the law," said Carol Ladape, lawsuit plaintiff and former tent city resident.

The dispute has been going on for years.

"The city would rather push homeless people out of the public view instead of helping them get housing," said Tom Gordon, lawsuit plaintiff and former Uptown tent city resident.

During the hearing, attorneys for the city argued that the current redesign, which includes bike lanes placed on sidewalks where the homeless lived, is not discriminatory.

"This is not an instance to take the clients facts and construe them in our favor. This city can enforce the laws for the best interests of public health and safety," an attorney for the city said.

Lawyers for the homeless contend the city's own guidelines say placing the bike lanes in the street would be safer for everyone. They say the construction is a deliberate attempt to remove homeless people and is a violation of the Illinois Homeless Bill of Rights.

"We have also adequately plead discriminatory intent, after we get the ruling to decide how to proceed," said Diane O'Connell, Chicago Coalition for the Homeless.

City officials say they've always maintained a commitment to providing services to the homeless and respect the rights of this vulnerable population. However, homeless advocates like Derrick Lyons say things have only gotten worse.