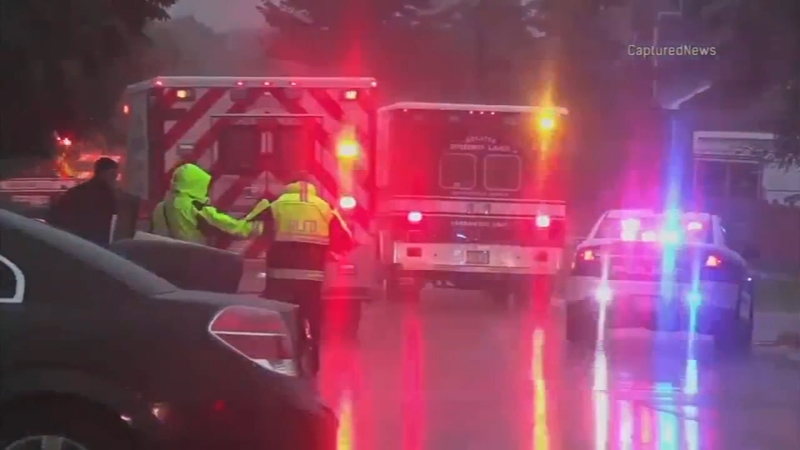 ROUND LAKE HEIGHTS, Ill. (WLS) -- Three children have been hospitalized after being injured after a lightning strike while waiting at a bus stop in north suburban Round Lake Heights Thursday morning.

Emergency responders were called to the scene at Lotus and Ottawa drives where a group of middle school students were standing under a tree when there was a lightning strike in the area.

Round Lake Fire Department officials said the children were trying to take cover from a moderate rainstorm just before 7 a.m. Witnesses said along with the rain, there was a lot of lightning and thunder in the area.

When the fire department arrived on the scene, three children were lying on the ground, semi-conscious.

One of the victims, 13-year-old Carrington Monk, spoke to Eyewitness News from her hospital bed.

"I heard thunder and then the next thing I know I'm lying on the ground," Monk said. "Kids are running back home getting parents, parents are coming over to check on me and two other girls."

The shock was literal and figurative for Monk and her two friends.

"It was pretty scary," Monk said.

Officials believe the lightning struck nearby and traveled to where Monk and the other children were standing.

"They heard thunder and next thing you know she was passed out. She said she fell backwards and the other two girls did also," said her mother Charlene Monk.

Paramedics rushed to the scene after Monk was knocked to the ground unconscious.

The Round Lake Heights police said when the lightning hit, many of the children ran to their nearby homes for help and firefighters have gone door-to-door to check to make sure all of the children are safe.

"A number of students fled the scene right after the strike they ran home and got transported to school by other methods," said Deputy Chief Joe Krueger of the RLFD.

When she woke, "I was shaken up a little bit, but then I started to calm down and I was better," Monk said.

Three students were taken to the hospital but seem to be doing OK. One was in serious condition but is now in recovery.

"I've talk to each of their parents right now they are alert, they are communicative," said Lake Villa District 41 Assistant Superintendent Alex Barbour.

As for Monk, "all the tests came back negative and I have to stay overnight, and if everything looks OK, I get to go back home tomorrow."

Monk's school has reached out to her to see if there's anything she needs. No word yet on when she may be taking the bus next.