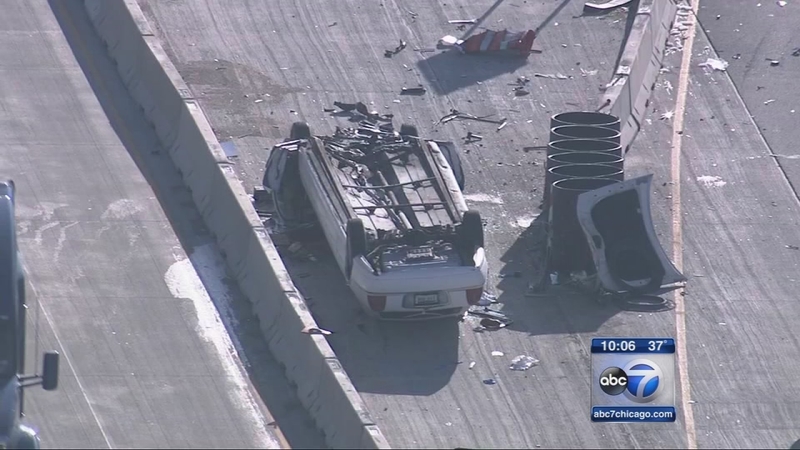 One killed in rollover crash

Five passengers, along with the 20-year-old limo driver, were injured.

The driver told Illinois State Police he lost control when he was blinded by the sun just before 7:15 a.m. He said he couldn't see the traffic pattern in front of him. He crashed into a concrete divider, which caused the limo to flip over onto its roof.

When crews arrived, five people had already removed themselves from the vehicle. Off-duty Streamwood firefighter and paramedic Chris Tierney was four cars behind the limo when he witnessed the wreck. He used a hammer in his truck to break the windows of the limo to help get the injured out, actions he say were just instinct. Tierney says flames were shooting from the hood of the overturned limo.

He says construction workers helped him with the injured as they waited for emergency crews to arrive.

One victim, a woman in her 50s, was fatally injured. Tierney tried to save her.

"Because of the traffic jam after the crash, all the incoming ambulances were delayed getting there, so those guys did a lot of work, they did a great job," said Tierney.

He also said he doesn't consider himself a hero and is thinking about the victims.

"Now that I'm winding down, I just pray for the victims and hope they can recover. People's lives changed dramatically today and all I can do is pray," he said.

Five people who were injured and the body of the woman killed at the scene were transported to the Sherman Hospital, a hospital spokeswoman said. Since then, two were treated and released and three more were transferred. Two people remain in critical condition Friday evening.

One person was taken to St. Alexius Medical Center in Hoffman Estates and is expected to recover.

The individual who was killed has not yet been identified.

The accident shut down several lanes of eastbound I-90 Friday morning.

The driver is being interviewed by state police. No charges have been filed. Investigators will look at whether speed or road conditions may have also been a factor.

A police official said there was road construction in the area and may have confused the driver.