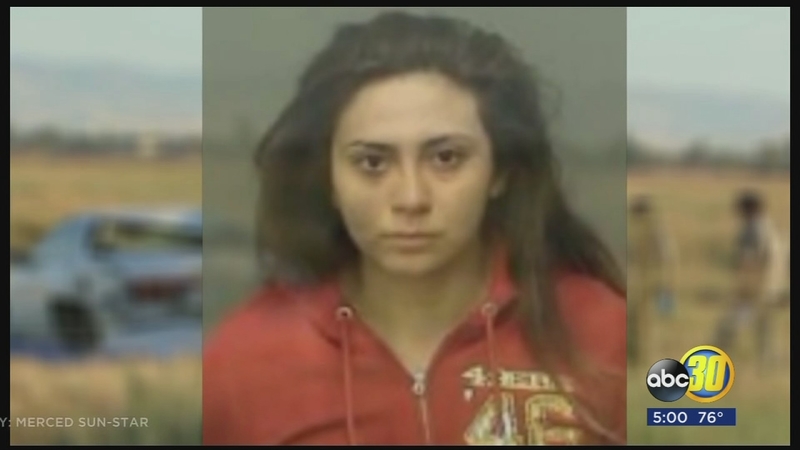 MERCED, Calif. -- Obdulia Sanchez was live streaming the crash that killed her 14-year-old sister, and on Thursday, she was sentenced to more than six years in prison.

"I would like to say I'm sorry and that if I could take your place, I really would," said Sanchez.

The Stockton teen was emotional in court while reading a letter of remorse to the judge.

"I wanted her to be smarter than I was, and now she's dead. It should've been me. Never Jackie, and never Manuela," said Sanchez.

Sanchez was charged with gross vehicular manslaughter and child endangerment for the 2017 crash.

#NEW: #ObduliaSanchez is sentenced to serve 6 years and 4 months in prison.

She streamed the gruesome video on Instagram which showed Sanchez screaming over the body of her sister, Jacqueline Sanchez.

Prosecutors gave new details about Sanchez' blood sample, saying that she was not only under the influence of alcohol, but that her blood also showed traces of marijuana and cocaine.

"I'm going to jail for life. I understand that I don't care," said Sanchez.

Judge states he does not agree with prosecutors that parts of the video shows callousness. He says it seems like it's a cry for help stated in a crude way. #obduliasanchez @ABC30

Prosecutors argue that the language in the video show Sanchez' disregard for her sister's death.

"She killed her sister but she didn't care, that's one reasonable interpretation. As well if there was any case that deserves a max, this is it," said Prosecutor Thomas Min.

Sanchez' attorney says the troubled teen was sexually abused at 11. She was later abducted, and then trafficked a year before she was placed in a group home.

He says her language in the video was a cry for help.

"What she's saying is that she doesn't care what the consequences are, she just wants someone to show up and help her sister," said Sanchez' Attorney Ramnik Samrao.

Sanchez parents thanked the court despite her sentence, her father says his daughter is taking responsibility.

"Lula did something wrong, and she knows and she accepts everything and she do it," said Sanchez' father Nicandro Sanchez.

Sanchez ' attorney and parents requested probation so she could come home and get the care she needs, but it was denied.

Sanchez ended her own letter by saying that she does not want to go to prison, but that deserves the punishment.