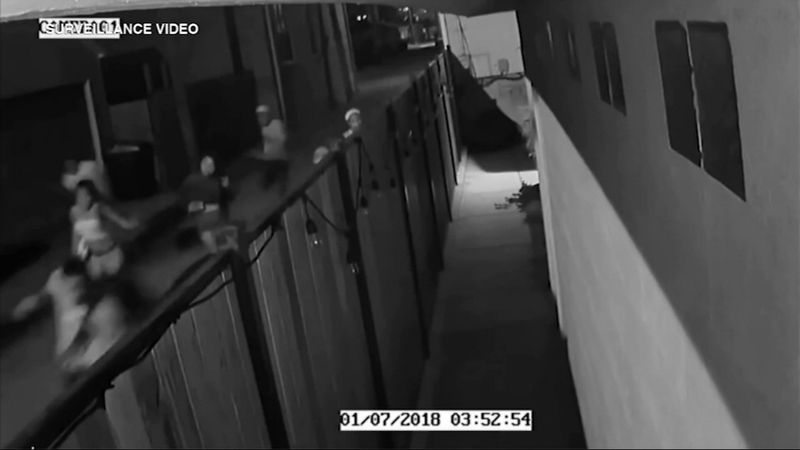 CHICAGO (WLS) -- Two people were shot after a big party held at a home rented on Airbnb in Chicago's Logan Square neighborhood earlier this month.

Neighbors described the incident as an all-out gun battle in the 1900-block of North Lawndale Avenue. Multiple homes on the block full of young children were left riddled with bullet holes.

A surveillance camera captured the aftermath of the shooting. Several people were seen racing down an alley to escape the gunfire. They were among a large crowd of partygoers, who neighbors said were gathered at a house party on the block.

Neighbors said dozens of shots were fired around 4 a.m. on July 1. Chicago police said two people were wounded by gunfire on the street and neighbors were left rattled.

"Sounded like an absolute war. More shots than we could count. I ran outside in a towel to see what was going on. There were a lot of people," said Adam Conolly, neighbor.

Conolly's home was left riddled with bullets, as were the homes of his neighbors.

"My kids sleep on the external wall here to the street, and people were shooting at waist height, but had those bullets been going upward, I don't even want to think of what would have happened," said Christina Cochran, neighbor.

Police said the house had been rented on Airbnb for the party, and as partygoers spilled outside an altercation led to gunfire. Two people were wounded on the street, according to police.

In a statement, Airbnb said "...negative incidents are extremely rare. We have zero tolerance for this type of behavior. We have removed this host and guest from our platform while we investigate this incident and will be supporting the neighbors impacted under our Host Protection Insurance program..."

"There were easily 200 people in this house that night. I don't think that's what Airbnb was meant for," Conolly said.