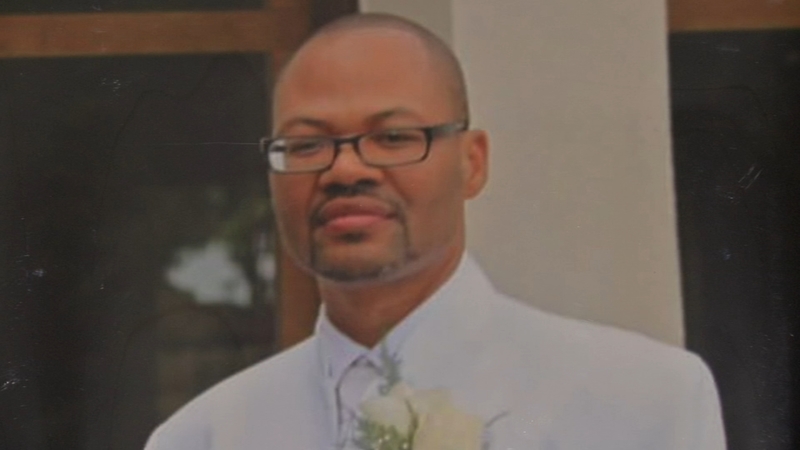 CHICAGO (WLS) -- The family of a Chicago Ridge man who was fatally shot while visiting his mother in Chicago last month is asking the public for help in solving the murder.

Lonnie Smith, 47, who was a Boeing custodian for nearly 20 years, killed July 26 while on his mother's porch in the Englewood neighborhood while he showed her his new camera. Chicago police are still investigating, but no one is in custody.

It was the night before Smith's birthday.

"I just want to show my husband that I will fight for him to find out who killed him and I know he would do the same for me," said his wife Lasonda Smith.

She wants to seek justice for her husband. Police may have security video to work with, but it's not much, she said.

"Even just saying it now it feels like I can't even breathe, he was my heart still here right to the state I am wondering, just wondering, how could someone just shoot someone like that just cold blood," Lasonda Smith said.

Smith was a man proud of his job at Boeing and his sideline work of photographing prom and family gatherings. The couple had relocated to the south suburbs two years ago to start a family.

"I keep thinking in my mind I wish I could have stopped him from leaving that night but I didn't know this was going to happen so I'm beating myself up and saying what if," Lasonda Smith said. "Everyone at his job is broken, everyone at my job is broken."

In death, she wants to protect her husband's reputation

"They try to stereotype and say, 'You know, he was a drug dealer. He was a gangbanger.' He didn't do any of those things he worked every day, on the weekends he did his pictures. He was just a good guy. Took care of me and I never had to worry about anything," she said.
Report a correction or typo
Related topics:
chicagochicago ridgeenglewoodwest loopchicago shootingchicago crimeboeing
Copyright © 2022 WLS-TV. All Rights Reserved.
TOP STORIES
Security guard shoots man in buttocks at Millennium Park
Chicago mass shooting victim ID'd as father of 2, with twins on way
9 shot, 2 fatally, on Near North Side
Postal police say they are sidelined during time of heightened crime
New hotline aims to help those struggling with opioid, substance abuse
Officer relieved of powers after teen carjacking suspect shot: CPD
Chicago Weather: Occasional showers, thunder Saturday
Show More
United cancels couple's flight, charges $4K more for same seats
Teen charged with killing man after kicking him in head in CTA attack
Great Lakes Piping Plover chick Imani spotted in Minnesota
Doja Cat drops out of Lollapalooza due to throat trouble
Legendary Cubs pitcher 'Fergie' Jenkins immortalized with statue
More TOP STORIES News