CHICAGO (WLS) -- In the heart of Chicago's financial district, a man who had just been demoted at work shot the company's CEO before turning the gun on himself, police said. No one else was injured.

Tony DeFrances, 60, allegedly shot Steven LaVoie, 54, at the office of ArrowStream, which is located on the 17th floor of the Bank of America Building at 231 South LaSalle Street in Chicago's Loop, around 9:50 a.m. Thursday. The building was secured about an hour later and other offices re-opened for business. Chicago police remained on the scene.

"Apparently he was despondent over what happened, that he got demoted," Supt. McCarthy said. "There was apparently a struggle over a firearm. The CEO was struck twice. The man took his own life."

DeFrances, as identified by Tower Lakes Police Chief Samuel P. Sinacore, was pronounced dead at the scene. He had what appears to be a self-inflicted gunshot wound to the head, according to initial reports.

"We were contacted by the Chicago Police Department, and asked to notify them that they had a family member injured," LaGrange Police Chief Michael Holub said.

McCarthy said DeFrances had been demoted from chief technology officer on Friday due to downsizing at ArrowStream, which offers supply chain management technology software. DeFrances had scheduled a one-on-one meeting with LaVoie, ArrowStream's CEO, when shots were fired. LaVoie was hit in the head and stomach, police said.

George Volland said his friend "must have snapped."

"(DeFrances) was a giver. He was a great guy. I heard about it at work. I work right down the street. Frankly, I'm shaken. I want some people to know he wasn't a monster," Volland said. "I'm shaking right now. I can't believe it. You hear about these things and you can't imagine it'll be a friend of yours."

"Ten witnesses up there who were on the floor are being interviewed," McCarthy said. No one was actually inside the room when the shooting occurred, he said.

Workers in the building were originally told to stay in their offices. They were given the all clear around 10:45 a.m.

"It's tough to go back to work. What do I do tomorrow? Do I go to work like nothing happened, or do I keep worrying? It's touch," Stefano Freddo said. Freddo works in the same building.

LaSalle Street, which was closed during the investigation, reopened around 11:25 a.m.

Sinacore said Tower Lakes police did not have any problems with DeFrances' family and that they were good residents. Upon hearing the news, Sinacore said he went to the DeFrances' home for a well-being check and found the family in shock.

ArrowStream released a statement that read, in part, "We are deeply saddened and shocked by the events that have occurred today. Our focus during this tragedy is to ensure the well being of our ArrowStream family." 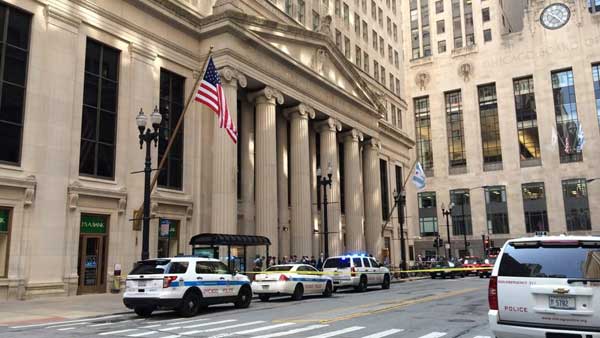