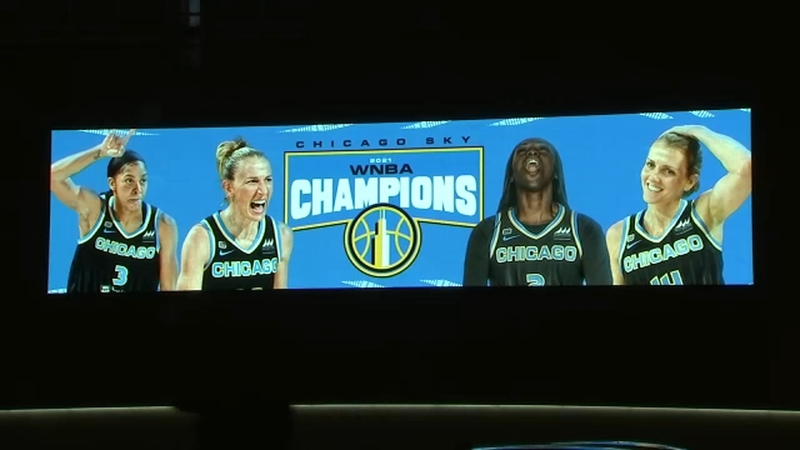 CHICAGO (WLS) -- The Chicago Sky won their first championship Sunday, beating the Phoenix Mercury 80-74 in Game 4 of the 2021 WNBA Finals.

Mayor Lori Lightfoot told 670 The Score Monday morning that the championship rally would be Tuesday in Millennium Park.

This one is for you, Chicago. 🏆

The Chicago Sky are your 2021 WNBA Champions. pic.twitter.com/Pv4KiTzLIA

Lightfoot agreed the city needed the win right now. She embraced the victory Monday morning in her interview with 670 The Score, saying the title came at the perfect time for Chicago.

"You've got to take the good right... take the wins, and there's a lot of really good stuff that's happening in our city," Lightfoot said. "Obviously, we focus a lot of time and attention on the serious stuff. But the good stuff can't be eclipsed. And this is an amazing story."

Lightfoot confirmed details of a championship rally in that interview, saying the city will host a celebration Tuesday at Millennium Park. Her family has already made arrangements to be there.

"It'll be tomorrow and we'll get the details out later today and I really encourage everyone to come," Lightfoot said. "My daughter's already lobbied, she's taken a day off school to be able to be there. I think it'll be a great crowd."

RELATED: Chicago sports bring back some normalcy to city businesses

The historic win brought a special atmosphere to the entire city, and a sold-out crowd at Wintrust Arena went through a rollercoaster of emotions down the stretch of that game. The WNBA said more than 10,000 people witnessed history as the Sky won their first-ever championship.

Andy Nussbaum, who coached Sky star Candace Parker when she was at Naperville Central High School, was in the stands to witness it.

"She is a wonderful human being, in 32 years she is the top three nicest players we've ever had," he said.

"It was like a memory of when we won state at Naperville Central, the realization that we won and that it's ours," Parker recalled after Sunday's win. "Man, there's nothing like coming home."

"It was so much fun to watch, as a basketball coach," Nussbaum added. "So much pride. We are so proud of her, to be able to call her a Red Hawk is just awesome."

Some of Chicago's own stars even came out, including Chance the Rapper, to cheer on the team and celebrate the huge win.

"That was the craziest game I've ever seen in my life down to the last second and they really just fought it out," Chance said. "They took that win back."

"I had the chills," Kelley said. "I knew they were going to come back. Right when Allie got hot I was like 'oh, they got it.'"

The Chicago Sky's parade and celebration will begin Tuesday at 11 a.m., with the team departing from Wintrust Arena and traveling to Jay Pritzker Pavilion in Millennium Park for a rally that will begin at noon.

The parade will leave Wintrust Arena, then travel north on Michigan Avenue from Roosevelt Road to Randolph Street. Then the route will turn east to Pritzker Pavilion. Fans are encourage to gather along the route to cheer the team on.

The celebration rally will be held at Pritzker Pavilion at noon. It is free and open to the public, but all attendees must pass through security screening at the entrances at Monroe Street and Michigan Avenue.

As a result of the celebration, the following rolling street closures are expected to begin after 10 a.m.:


Streets will reopen once the motorcade passes, city officials said.

Randolph Street between Michigan Avenue and Upper Columbus will also be closed for a short time once the Chicago Sky buses arrive at Millennium Park.

CTA buses will be detoured in the downtown area due to the parade and celebration. Officials encourage using public transportation to attend the parade and rally.

Metra is also offering a one-day $5 unlimited ride ticket for the celebration. Passengers are encourage to purchase their ticket in advance.