Rep. Luis Gutierrez announces he is not running for re-election, endorses Chuy Garcia 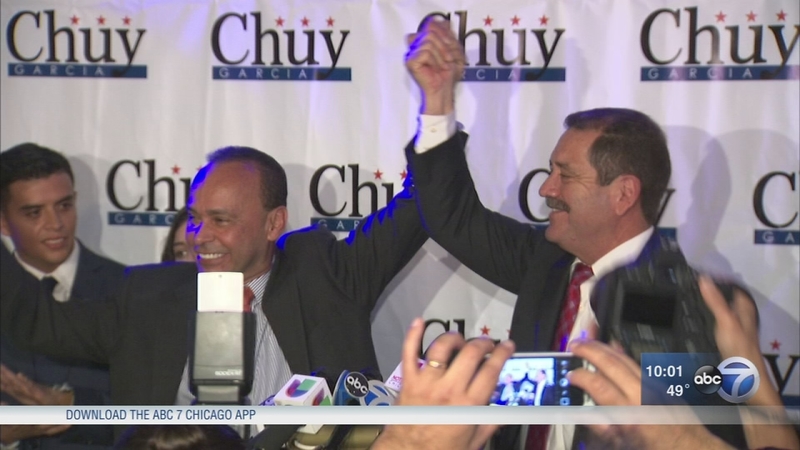 CHICAGO (WLS) -- Congressman Luis Gutierrez announced Tuesday that he will not be running for re-election in 2018 and endorsed Cook County Board Commissioner Jesus "Chuy" Garcia to replace him.

Gutierrez has represented Illinois' 4th Congressional District since 1993. The 63-year-old congressman said he won't seek re-election in 2018. His term ends in 2019.

"I would not have made this decision unless there was somebody who could step up and give new life to the agenda in Washington D.C.," Gutierrez said.

An emotional Luis Gutierrez announced he won?t run for re-election and is backing a longtime friend and political ally.

By running for Congress, Garcia takes himself out of a potential rematch against Mayor Rahm Emanuel in 2019; Garcia lost a runoff election to Emanuel in 2015. But he said there was no quid pro quo to get him to run for Gutierrez's seat, which makes the path to re-election much simpler for the mayor.

"He played no role in my decision to run this race. This race feels right to me, to my wife to many supporters for the reason that there is an urgent need for an immigrant voice from the Midwest in Congress," Garcia said.

Gutierrez said he is leaving Congress because he wants to spend more time helping Puerto Rico recover from the devastation in the wake of Hurricane Maria.

"And there's a lot of people that have turned their backs on her and she needs to be rebuilt. And I cannot be here in the 4th Congressional District and be rebuilding the home of my mom and my dad, where my wife was born, a place that I love so much," Gutierrez said.

Gutierrez has long been outspoken on immigration issues and is a leading critic of the Trump administration. He said he has no intention of running for governor of Puerto Rico, but he has not closed the door on his political future.

At his Tuesday press conference, Gutierrez spoke about how he and Garcia both got their starts in Mayor Harold Washington's administration in the 1980's. Explaining his choice to leave Congress after 25 years, he referred to advice Washington gave him years ago.

"He told me, 'You know who I really respect, I respect people who know when it's time to move on. And move on, on their own terms. In their own time.' This is my time," Gutierrez said.

Gutierrez had filed nominating petitions Monday to be on the ballot, but is expected to withdraw them. Garcia is expected to begin circulating his own petitions for Congress Tuesday and they will be due next Monday

But another alderman, Carlos Ramirez-Rosa, said he will also run to replace Gutierrez. He met with supporters Tuesday afternoon to get petitions going immediately.

"I'm circulating because I want to have a dialogue along with a conversation with the voters of the 4th Congressional District about how we sent the strongest, boldest, progressive leadership that we can to D.C.," Ramirez-Rosa said.

On Gutierrez's decision to back Garcia, Ramirez Rosa said, "It's not how I would have handled the situation if I were the Congressman and retiring ... (The) Democratic Party benefits when we have open, contested primaries."

.@CDRosa on Gutierrez decision to back Chuy: "It's not how I would have handled the situation if I were the Congressman and retiring ... Democratic Party benefits when we have open, contested primaries." pic.twitter.com/JaObdI4jOr

Congressman Gutierrez is well-known for his passionate efforts representing the Latino community and pushing for immigration reform.

Gutierrez is well-known for his passionate efforts representing the Latino community and pushing for immigration reform.

When the news broke of Gutierrez's decision Monday night it was a complete surprise, even to some of his closes supporters.

"Outside of Chicago, everybody knows Congressman Gutierrez in the Latino community," said Artemio Arreola of the Illinois Coalition for Immigrant and Refugee Rights. "For 24 years he's the congressman that's most active for immigrants."

Not afraid to stand up to members of his own party, or get himself arrested once or twice, Gutierrez is known to his supporters as "El Gallito," the little fighting rooster. Fighting is something he's become famous for, going back to his City Council days and famous confrontation with then-Alderman Bernie Stone.

"He was making point in City Council and he ended up standing up on the table and one of the aldermen called him a pipsqueak and he didn't back down," said former journalist David Cordoba.

But while everyone in Chicago's Latino community knows Gutierrez, not everyone likes him. At a Humboldt Park community center, the mostly Puerto Rican members spoke of feeling ignored in favor of the city's larger, Mexican-American community.

"When we really need from him, he's not there. It's time for him to leave," said Beatriz Gomez said.

Polarizing or not, longtime political watchers agree: the biggest difficulty Gutierrez's successor will have is building his own personal brand.

From a policy standpoint not much is expected to change when Congressman Gutierrez retires.

Whoever is elected will all but certainly be Latino and continue to support the same issues.

U.S. Senator Dick Durbin released a statement saying, "Luis Gutierrez has been my strongest partner in working for the Dream Act and comprehensive immigration reform. His voice will be critical in the remainder of his term and sorely missed thereafter."

Mayor Rahm Emanuel released a statement saying, "Luis Gutierrez represented Chicagoans in the Chicago City Council and US Congress for more than three decades, serving his constituents, his city and his country with honor. One thing I know is Luis Gutierrez will not stop fighting for what he believes in until the last vote is cast, and even then will continue working for the causes he has championed throughout his life because he believes in them with his heart. Luis Gutierrez's journey from a taxi driver to a US Congressman is a testament to the power of the American Dream. I have been proud to call him a dear friend and trusted colleague, and stand with Chicagoans and Americans everywhere in expressing my appreciation for his service and wishing him well in his next chapter."

Cook County Board President Toni Preckwinkle released a statement saying, "For more than two decades, Rep. Luis Gutiérrez has been a tireless champion for his district and for the issues he cares about most, immigration reform and gun violence prevention. His admirable fight to protect DREAMers -- promising young undocumented immigrants brought to this country by their parents -- will be remembered by the countless families who benefitted from his efforts and, I hope, by history. Rep. Gutiérrez also has been a leading advocate for Puerto Rico, from which his parents migrated, and his voice on behalf of these U.S. citizens has proven especially critical in these trying times for the island.