Lyft driver carjacked in Bronzeville: 'Said he was going to kill me if I didn't get out of here'

WLS
By Jessica D'Onofrio
CHICAGO (WLS) -- Darren Reboletti has only been driving for Lyft for about a month. Early Wednesday morning he became the latest victim of yet another carjacking - a crime that is sweeping the city.

The 52-year-old man dropped off a fare near Dunbar Park in the 3100-block of South Prairie Avenue in the city's Bronzeville neighborhood, not far from Chicago Police Department headquarters, around 1:30 a.m.

That's when police said Reboletti's 2017 Jeep Cherokee was bumped from behind by someone in a blue Ford Expedition.

"He was real nice. He said, 'I'm really sorry, we weren't paying attention. I didn't mean to bump you.' As we started to walk away, then he moved really fast, grabbed my door handle, got inside my car," Reboletti said.

While the suspects didn't say they had a weapon, one of them threatened him. He said he struggled with that suspect, but fearing for his life, he gave up quickly.

"Said he was going to kill me if I didn't get out of here. So I figured rather than have that happen, I'd give him my car," Reboletti said. He was not hurt.

Luckily, his new Jeep came with a locator app. He was able to track the car with police and they found it quickly. It was dumped and unoccupied near East 47th Street and South Martin Luther King Drive.

Reboletti was carjacked just blocks away from where an off-duty Chicago police officer was nearly robbed of his personal vehicle at gunpoint on Monday, near East 36th Street and South Prairie Avenue. The officer fired a single shot, hitting one of the suspects. The 18-year-old man survived and was charged in the crime.

"The only reason, in my opinion, why this nonsense is happening, is because there's no consequences. Nobody's being punished for this. They know that if they get caught, they're going to get right out of jail the same day - the same night," Reboletti said.

Reboletti said the carjackers cleaned out his Jeep, taking his checkbook and other personal items. He plans to get a concealed carry license. 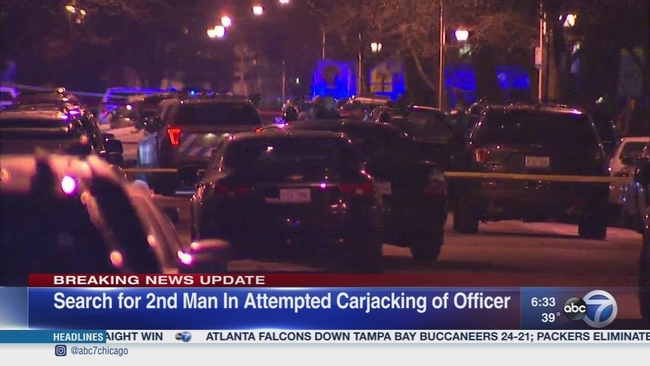