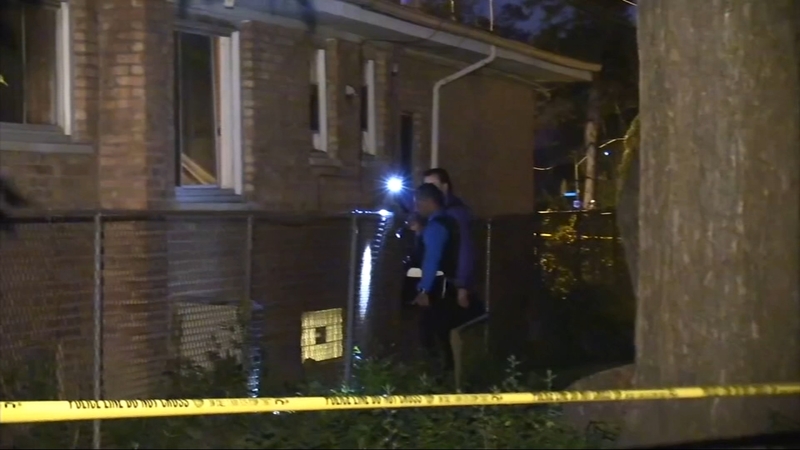 CHICAGO (WLS) -- Chicago police are conducting a homicide investigation after a man was fatally shot during a home invasion involving four men on the city's Far South Side.

The medical examiner has identified the victim as 43-year-old Demetrius Jones.

Police spent hours canvassing Chicago's Longwood Manor neighborhood near West 97th Street and South Harvard Avenue, speaking to neighbors and hauling out evidence from the home that belongs to one of their own. Public records confirm that a female Chicago police officer lives here.

"I am stunned and at a loss for words. I have never seen anything like this happen in our neighborhood and like I said, I've been here for a long time in the neighborhood," Debra Price said.

A source said Jones was the officer's husband. Police will only say Jones and the officer were involved in a domestic relationship.

Just before 4 a.m. Thursday morning, investigators say Jones confronted four home invaders who crept in through a side window. He then struggled with one of them. At some point one of the offenders fired shots hitting him in the back and the chest.

"Last week on 95th, someone just got killed on 95th, like maybe two weeks ago, so it's a lot of violence in this but you would never suspect it on this block," neighbor Toron Davis said.

There is a home surveillance camera mounted above the window where the burglars got in which could help detectives.

The victim was taken to Advocate Christ Medical Center, where he was pronounced dead. Police have not confirmed the identity of the victim.

Meanwhile neighbors say this area is home to many police and firefighters.

"It makes you feel a little bit safer but they're regular people, too," neighbor Tameka Lasticly said.

A source said the officer was home at the time of the invasion and that there was someone sleeping on the couch. Neither were injured. Neighbors say the officer lives there with the victim and two teenage sons.

Police said no other injuries were reported at the home.

No one is in custody and police have not released a description of the home invaders.
Report a correction or typo
Related topics:
chicagobrainerdroselandchicago shootinghome invasionman killed
Copyright © 2021 WLS-TV. All Rights Reserved.
More Videos
From CNN Newsource affiliates
TOP STORIES