VIDEO: Florida man accused of throwing another man off bridge 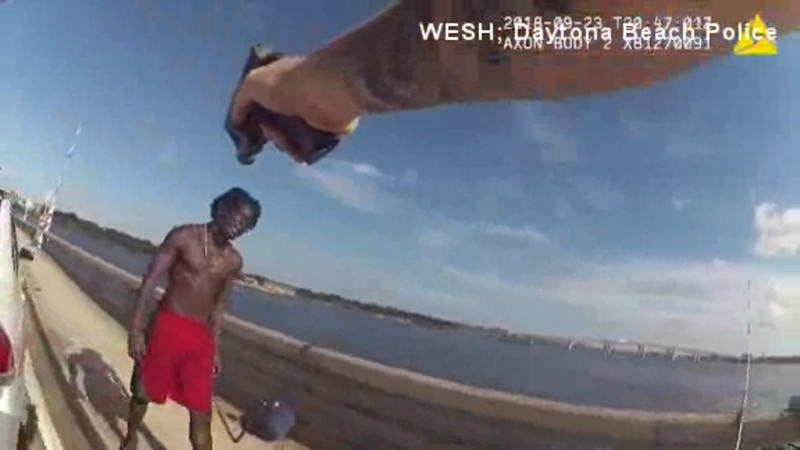 Man accused of throwing another man off bridge

DAYTONA BEACH, Fla. -- Police in Florida said a man and a woman whose bike had a flat tire were attacked as they tried to walk across the Main Street Bridge in Daytona Beach.

Derrick Goodin, 21, allegedly began yelling at 34-year-old Stephanie Ellis about a prior money exchange and threw her bicycle off the bridge, WESH reports. According to a police report, Goodin struck Ellis in the face during the verbal argument.

Anthony Mascaro, 33, tried to intervene and got into a fist fight with Goodin, the police report said. But Goodin allegedly threw him "face-first" into the water, about 30 feet below.

Officer Christopher Maher, who was driving across the bridge around 5 p.m. Saturday when the incident occurred, said he witnessed what happened and recorded it on camera.

"He just threw my bike over the bridge, dog," Goodin told Maher in the video, after he got out of his squad car.

Maher had his gun drawn on Goodin and ordered him to the ground. Police said Goodin threw a wallet in the water.

"He insulted my property. I felt threatened, sir," Goodin told Maher in the video.

"You just threw a male over the ****ing bridge," Maher said.

"He jumped over the bridge," Goodin said.

Mckenzie Reijonen, who was in his rowboat, picked up Mascaro, who had made his way to a pylon. He suffered a small cut and a bloody eye.

"The guy was bleeding from his face. He was standing on the black pilings there, and there doesn't appear to be a way for him to get back up, so I asked the police if I could be of assistance," Reijonen said.

Both victims refused to press charges, but Goodin was arrested anyway, for throwing someone off a bridge. Police said the act could have prompted serious injury or death.

Goodin was held without bond on aggravated battery charges and couldn't be reached for comment.