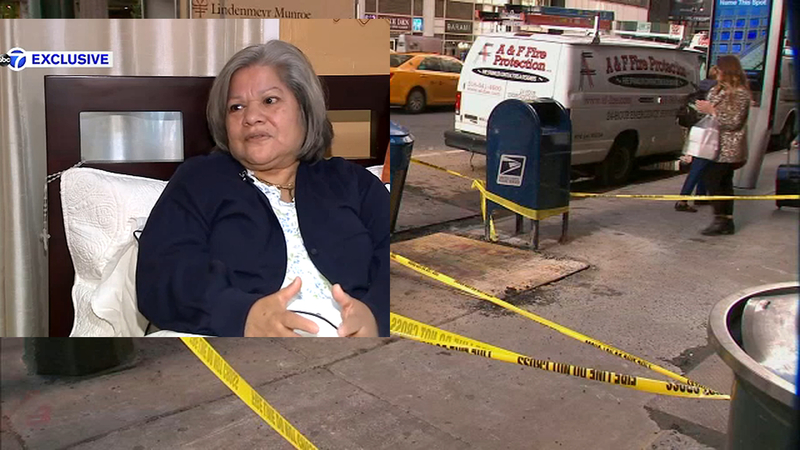 MIDTOWN, Manhattan -- The woman who fell into a sidewalk hole in Midtown Manhattan last week is talking exclusively with Eyewitness News about her frightening experience.

She waited helplessly in a muddy puddle for help.

Cedeno lived the ultimate urban nightmare when she made the mistake of walking through a construction project run by a company called NYC Water Works, contracted by a private building and permitted by the city.

The hole is now covered up by a steel plate, held in place by asphalt all around.

But Angela says when she walked there it was just a flimsy piece of plywood, that flipped open beneath her like a trap door.

She was rushed to Bellevue Hospital, where fortunately doctors determined she had broken no bones. But she is still badly bruised.

In the hours after the incident, the contractor, NYC Water Works, sent employees and a roll of yellow tape to keep people away.

Since then, the metal plate appeared, though it still doesn't seem all that stable. Monday night Eyewitness News called the contractor, which didn't get back to us.

"What happened?," asked Angela. All she wants is an explanation, and at the very least, an apology.