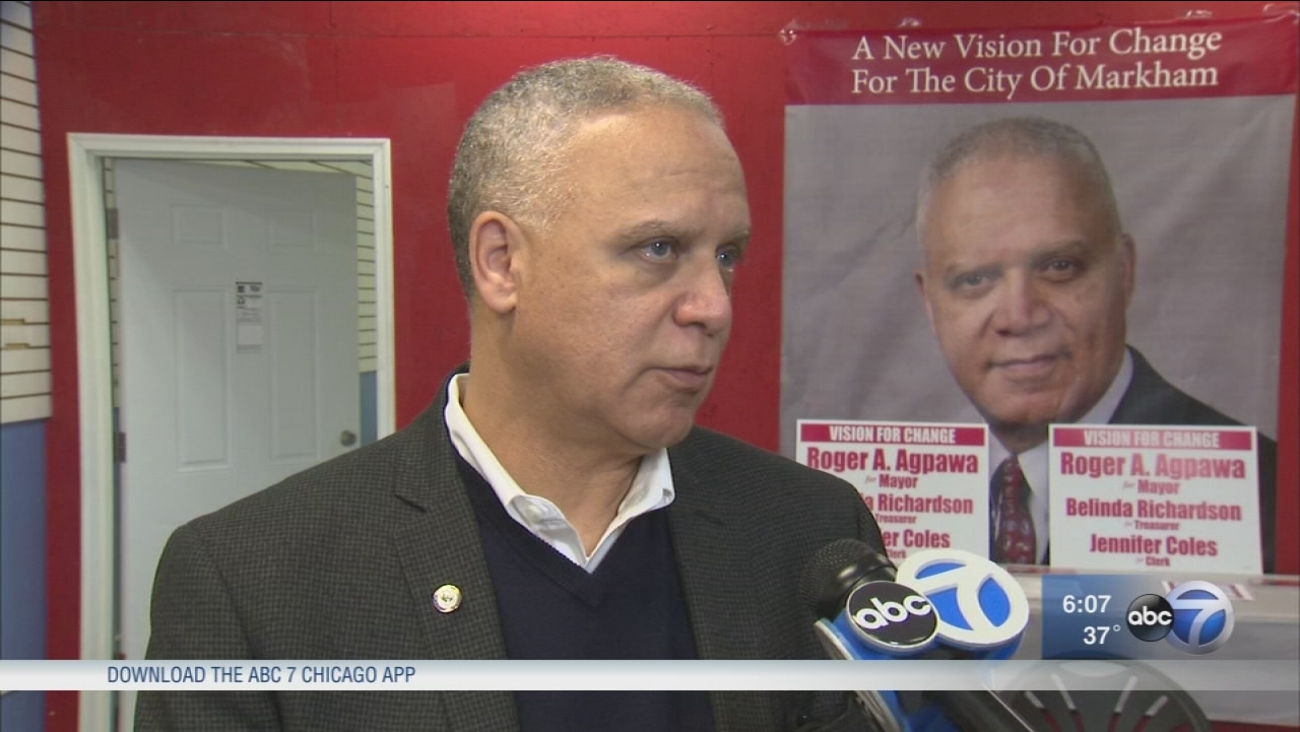 When voters go to the polls next month in suburban Markham, hey have two choices in the race for mayor - but one may be barred taking office if he wins. (WLS)

MARKHAM, Ill. (WLS) -- When voters go to the polls next month in suburban Markham, they have two choices in the race for mayor - but one may be barred taking office if he wins.

Roger Agpawa is a convicted felon, and Illinois state law says convicted felons cannot hold a municipal office. Agpawa says he is eligible to run and serve as mayor despite his felony conviction.

But his opponents disagree and they want him out of the race. Kenneth Muldrow - a write-in candidate - is calling for Agpawa's name to be taken off the ballot.

"His situation has been well documented. He is a convicted felon which means he can't hold office. He can't take the oath of office," Muldrow said. "All I would like for the state's attorney to do is to do her job. The law is the law."

Agpawa doesn't deny his prior felony conviction. He says he was sentenced to three years' probation, ordered to pay thousands of dollars in restitution and perform community service.

According to the State Board of Elections, a convicted felon is not eligible to be sworn in for a municipal office. But state law doesn't stop them from running.
So what happens if he wins?

"If the guy has a disqualifying felony and wins the election and doesn't back down, attempting to enforce it will require some use of public resources from one entity or another," said Ken Menzel, general counsel to Illinois State Board of Elections.

"If that happens, it is going to cost the citizens of Markham a lot of money," Muldrow said.

State Board of Elections officials say the first line of defense is the city council. But if they choose to swear the candidate in, then the state's attorney's office or the attorney general's office can step in and file proceedings to have the candidate removed. If they all wish not to do so, the public can also push for removal.
Related topics:
markhamelection
Copyright © 2021 WLS-TV. All Rights Reserved.
TOP STORIES
2 officers hurt, 21 arrested in Loop amid rash of violence: police
Man says he helped parents of accused Michigan school shooter
Iman Shumpert talks about winning 'Dancing With the Stars': EXCLUSIVE
27 shot, 6 fatally, in Chicago weekend violence: CPD
Peoria County corrections officer dies from COVID-19
Fire breaks out at Hammond law office of murdered attorney
Community Christmas tree burned in Washington Park
Show More
Biden administration to announce Beijing Olympics diplomatic boycott
Omicron updates: New US travel rules go into effect Monday
Delivery driver among 2 shot in Back of the Yards, police say
Missing endangered man, 64, last seen in Palos Heights: police
Chicago prepares for arrival of Omicron variant
More TOP STORIES News