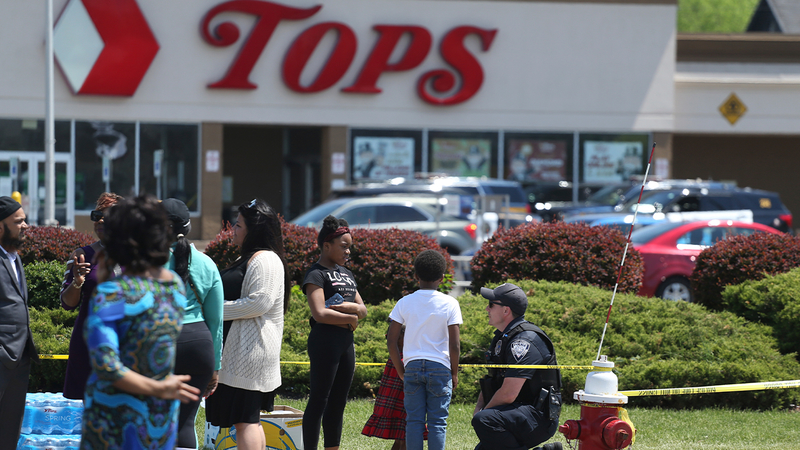 WASHINGTON -- Top Republicans in the House of Representatives are facing new scrutiny as critics, including within their own party, contend they failed to condemn the same racist rhetoric espoused by the suspected gunman who killed 10 Black people at a Buffalo, New York, supermarket on Saturday, ABC News reported.

The far-right conspiracy that white Americans are being intentionally replaced by minorities and immigrants - known as the "great replacement theory" - was included in a 180-page screed posted online by the alleged shooter.

Republican Rep. Liz Cheney of Wyoming, a frequent critic of her own party, on Monday singled out what she called a parallel between those beliefs and the behavior of some fellow conservatives.

"The House GOP leadership has enabled white nationalism, white supremacy, and anti-semitism," she wrote in a tweet. "History has taught us that what begins with words ends in far worse. @GOP leaders must renounce and reject these views and those who hold them."

The House GOP leadership has enabled white nationalism, white supremacy, and anti-semitism. History has taught us that what begins with words ends in far worse. @GOP leaders must renounce and reject these views and those who hold them.

Cheney was notably replaced last year from her No. 3 post in the House's Republican leadership after saying she would "not sit back and watch in silence" as former President Donald Trump continued to falsely claim he won the presidential election.

In the wake of the Buffalo shooting, New York Republican Rep. Elise Stefanik, Cheney's successor, has become a primary target of criticism over how members of the GOP have voiced ideas similar to "replacement theory."

"Radical Democrats are planning their most aggressive move yet: a PERMANENT ELECTION INSURRECTION. Their plan to grant amnesty to 11 MILLION illegal immigrants will overthrow our current electorate and create a permanent liberal majority in Washington," Stefanik said in a Facebook ad for her reelection, which launched last August. According to Facebook, the ad, pushed out repeatedly, reached hundreds of thousands of people.

When Stefanik first tweeted condolences to her home state on Saturday, Illinois Rep. Adam Kinzinger, the only other House Republican to sit on the Jan. 6 select committee with Cheney, said in a tweet, "Did you know: @EliseStefanik pushes white replacement theory?"

"The #3 in the house GOP. @Liz_Cheney got removed for demanding truth. @GOPLeader should be asked about this," Kinzinger added.

Fueling the criticism on social media was a 2021 editorial from Stefanik's hometown newspaper, The Albany Times Union, which blasted her last September in a piece titled "How low, Miss Stefanik?"

The editorial board had focused on Stefanik's "despicable" Facebook ads that echoed elements of "replacement theory." Her ads didn't mention the conspiracy theory by name, but they insisted, in part, that Democrats were looking to grant citizenship to immigrants who entered the country illegally in order to somehow gain an enduring majority - or, in Stefanik's words, a "permanent election insurrection."

With the piece recirculating on social media in the wake of the shooting, Stefanik and her team are pushing back on the renewed focus on her campaign ads.

Her office said Monday that making any link between her past comments and the shooting was a "new disgusting low" for Democrats and "Never Trump" Republicans as well as the media.

"Despite sickening and false reporting, Congresswoman Stefanik has never advocated for any racist position or made a racist statement," Alex DeGrasse, a senior adviser, said in a statement. "The shooting was an act of evil and the criminal should be prosecuted to the fullest extent of the law," he added.

Stefanik, DeGrasse said, "opposes mass amnesty for illegal immigrants .... She strongly supports legal immigration and is one of the national leaders credited with diversifying the Republican Party through candidate recruitment and messaging."

Stefanik isn't the only House Republican who has claimed there is a movement to "replace" voters.

Rep. Matt Gaetz, R-Fla., delivered an explicit endorsement of the conspiracy last September. Gaetz tweeted that Fox News host Tucker Carlson - who has said he believes "the Democratic Party is trying to replace the current electorate" - is "CORRECT about Replacement Theory as he explains what is happening to America" and called the Anti-Defamation League, which called on Carlson to resign, a "racist organization."

ABC News previously reported that evidence points to the Buffalo shooting being a calculated, racially-motivated execution by the suspect, an 18-year-old white man, according to multiple sources and a review of FBI cases and testimony. The teen gunman allegedly wanted a race war and livestreamed his attack in an apparent effort to spur others to kill minorities, sources said.

The suspect has pleaded not guilty to a charge of first-degree murder and is being held without bail.