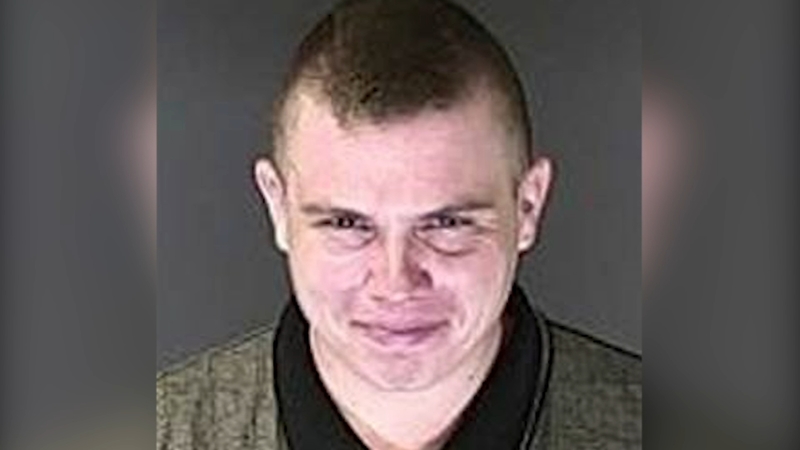 CHICAGO (WLS) -- An alleged white supremacist who wanted to wipe a Colorado synagogue "off the map" was motivated by notorious Illinois neo-Nazi Matt Hale, the I-Team has learned.

Richard Holzer, 27, appeared in a Colorado courtroom Monday afternoon on a charge of domestic terrorism. He was arrested Friday in Pueblo after meeting with three undercover FBI agents in an attempt to bomb the Temple Emanuel synagogue in what he called a "racial holy war." The temple is Colorado's second oldest.

Since September FBI operatives had been talking with Holzer and said they were tracking his multiple Facebook accounts and private messages with white supremacists in which they discussed attacking Jewish people and other minority groups.

Among the messages he wrote included one in which he said, "I wish the Holocaust really did happen," and another in which he said he was getting ready to shoot people while showing pictures of him holding guns and white supremacist regalia.

Holzer proclaimed his allegiance to "RAHOWA," an acronym for "Racial Holy War," that "is based on the teachings of Illinois neo-Nazi Matt Hale, who created that slogan to awaken white youth," stated FBI agent John W. Smith in an affidavit made available on Monday.

Hale, a disbarred Illinois attorney, oversaw the white separatist group "World Church of the Creator" in which he was the self-proclaimed "Pontifex Maximus" or high priest.

Hale's white supremacist organization is not affiliated with the Oregon-based TE-TA-MA Truth Foundation-Family Of URI, Inc., which won a court battle to exclusively use the "Church of the Creator" name.

He was sentenced in Chicago in 2005 for attempting to solicit the murder of U.S. District Judge Joan Lefkow. The judge's mother and husband were murdered at her North Side home, but in an odd twist of fate the double-killings were unrelated to Hale's threat.

And perhaps it's only a coincidence, but Hale is current serving a 40-year sentence at Colorado's super-max prison, 34 miles from Pueblo where Holzer was arrested.

The Hale-inspired plot in Pueblo began to unfurl when a covert FBI employee contacted Holzer pretending to be a white woman interested in white supremacy. Holzer told the undercover employee he was a former Ku Klux Klan member and a skinhead, investigators said.

In early October, authorities said Holzer told the FBI operative he was going to "scope out" Temple Emanuel and to "see if any ants come out of the HILL." Allegedly included in that message were pictures of him with Nazi propaganda, knives and masks.

During a recon mission to Temple Emanuel, FBI agents said Holzer talked about using pipe bombs and dynamite for more effectiveness. He allegedly said, "Let's get that place off the map."

Holzer also said that "he wanted to put the synagogue on the ground and demolish it" according to the FBI. Agents said the Pueblo man frequently wore a Nazi arm band and traveled with a knife, and a mask and a copy of Mein Kampf.

"According to the complaint affidavit Mr Holzer self-identifies as a skinhead and a white supremacist," said U.S. Attorney Jason Dunn.

A months-long plot they say, discussed with undercover FBI operatives, to blow up the building and anyone in it.

"During these conversations Mr. Holder also stated that he was not concerned about any loss of life from the attack because the victims would be Jews," Dunn said.

It is noteworthy that Illinoisan Matt Hale continues to be an inspiration for allegedly racist violence-despite his being in the nation's most secure prison for most of the last 14 years. Authorities have not said whether Holzer had actual contact with Hale, but that would seem unlikely. After the Bureau of Prisons designated Hale's organization as a security threat, prison officials began closely monitoring his mail and possessions.

"We thwarted an imminent threat to our community," said Dean Phillips the special agent in charge of the Denver FBI office. "At this point we do not believe there is any remaining public safety threat to the Colorado area."