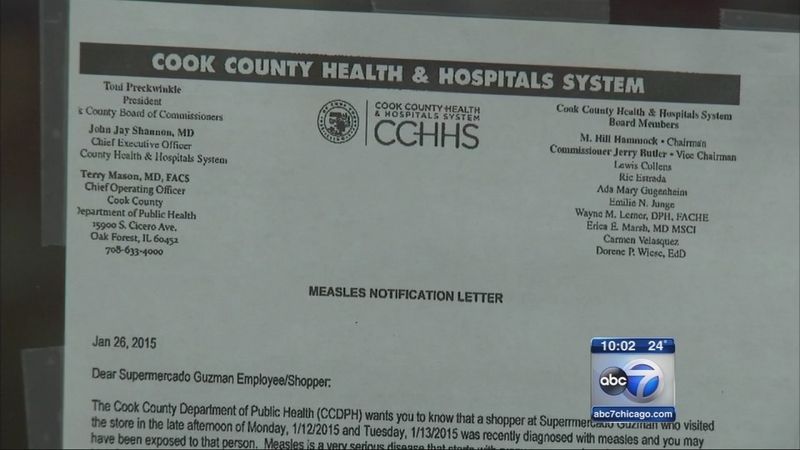 CHICAGO (WLS) -- A suburban Chicago resident has a confirmed case of measles and others may have been exposed in Arlington Heights and Palatine, according to state health officials.

The resident became ill in mid-January and the test results were positive for measles, according to Illinois Department of Public Health Director Nirav Shah. Measles are highly contagious, and can be spread for four days before symptoms present.

Officials said potential exposures from this Cook County case may have occurred at Northwest Community Hospital emergency room when the patient was being treated between 7 p.m. on January 14 and 12:30 a.m. on January 15 and again at 4 p.m. to 10:30 p.m. on January 17.

"Part of what makes measles so contagious is it actually remains suspended in the air for up to two hours after a person leaves," Brigette Bucholz, manager of Infection Prevention & Control at Northwest Community Hospital, said. The disease is spread through coughing and sneezing.

Other potential contacts may have occurred in Palatine at the Supermercado Guzman on January 12 and 13; and at the Vista Clinic on January 16.

"This case has probably exposed as much as a couple hundred individuals," Dr. Rachel Rubin, Cook County Department of Public Health, said. However, according to Dr. Rubin, those who were exposed who were vaccinated are not expected to develop the disease.

At the supermarket, it was business as usual Tuesday night.

"The health department for Cook County came this morning," said store owner Librado Guzman. "We got all employees together. They tried to find out if anyone is sick."

"Everybody who works here is fine," said Vaness Carranca, who works at the store. "I'm not worried."

Because the public school system in Illinois requires the vaccines, most people are not at risk. An Illinois State Board of Education report from fall of 2014 found that 95-percent of school-aged children have the measles vaccine.

Symptoms include fever, runny nose, red eyes and a rash.

"The time somebody is most infectious is four days prior and four days after developing the rash," Dr. Rubin said.

Anyone who was potentially exposed and is experiencing a fever of 101-degrees or other symptoms should call the Cook County Department of Public Health at 847 818-4020. They should not go to a doctor's office or emergency room.

Only 10 cases of measles have been reported in Illinois in the last five years, and the state averages only two reported cases each year. State health officials say this case of the measles is not connected to the 64 cases linked to a visitor at Disneyland.

"If you are not immunized, you have a 90-percent chance of measles. It is one of the most infectious diseases we know of," Bucholz sai