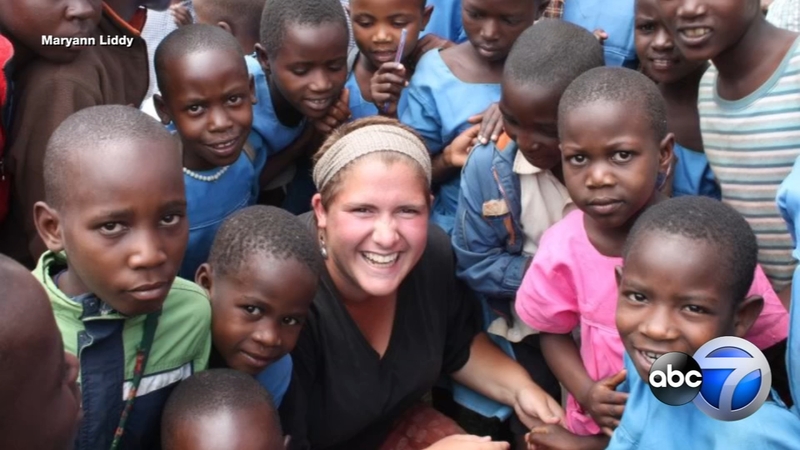 WARRENVILLE, Ill. (WLS) -- "You can always afford to give more love to anyone," said Dave Therriault of his late friend Meghan Liddy's message to the world.

She carried out that ideal as a nongovernmental organization worker, missionary and foster mother in Africa. But then, her mother Maryann Liddy said, the 25-year-old went to the hospital after contracting malaria. On Facebook she posted about her battle as late as Halloween. Maryann Liddy said her daughter died about a day later.

She was young yet mature, founding Family First- Ghana, which according to her LinkedIn page supports families whose children have medical and developmental needs.

"She was so tough and she put her heart and her soul into everyone," remembered Maryann Liddy, adding, "She was such a selfless person."

Generous enough to become foster mom to two young sisters whose mother died. Over the past few years, Maryann Liddy has gotten to know little Priscilla and Rhoda well by phone. She said they call her "grandma" and that Meghan was trying to finalize the girls' adoption when she died. Now Maryann Liddy is concerned about ensuring the girls are cared for moving forward; she's hoping to speak with the girls soon.

A Wheaton Warrenville South grad, Meghan Liddy first experienced Africa on a 2012 mission trip and then immediately decided she needed to go back.

"She had a plan to save, a plan to work, she worked three jobs."

On one of those jobs she met Therriault, who would become a dear friend and visit her in Ghana.

"(She) really didn't spend a penny on herself. She would feel guilty about buying a coffee... (because) she knew her mission, she knew her goals her goals," he recalled of the time she spent saving up for the return to Africa.

Liddy's mother said that passion was focused on supporting and ministering especially to children and women in need. If the smiles on Priscilla's and Rhoda's faces are any indication, she was succeeding in her work.

Maryann Liddy tells me until her daughter's medical bills are paid off, her body will not be released from the hospital in Ghana. Liddy would like to bring her daughter back to the U.S. to be buried in Nebraska.