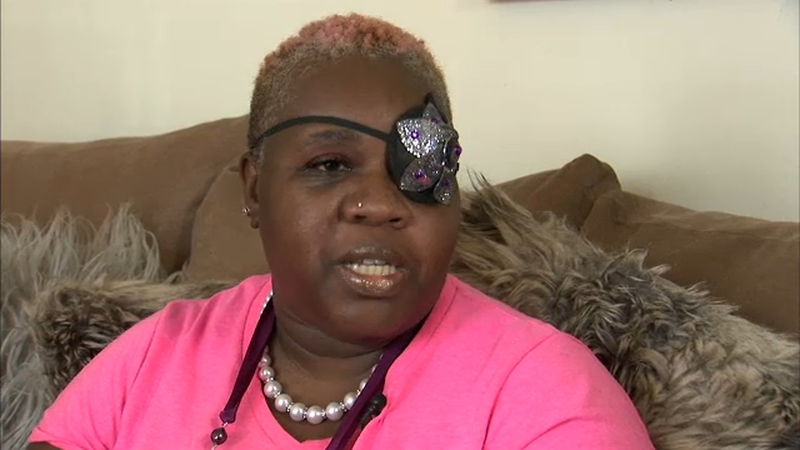 CHICAGO (WLS) -- A deadly shooting at Mercy Hospital on Monday was set off by an act of domestic violence following a breakup. The shooting has brought back memories for other domestic violence victims, and created an increase in the number of calls to hotlines.

Preparing for Thanksgiving, domestic violence survivor Yolanda Carter is thankful to be alive. But the Mercy Hospital shooting triggered a memory Carter wishes she could forget.

Four people were killed - including a Chicago police officer, an ER doctor, and a hospital worker -- Monday afternoon in a shooting at Mercy Hospital on the city's Near South Side.

"It took me back to March 22, 2016, where I was fighting for my life," said Carter. On that day, Carter woke up in a pool of blood. Her boyfriend beat her on the head with a hammer leaving Carter for dead.

Her left eye is gone and every bone in the 51-year-old's face was broken. In two years, she has endured 11 surgeries.

"This can happen to anybody, it has no age, no color, no gender. No one is excluded from this," she said.

Carter said domestic violence is a silent killer no one wants to talk about. She has written a book, hoping it will encourage victims to seek help before its too late.

The Mercy Hospital shooting has resulted in a flood of phone calls for many organizations, including Connections for Abused Women and Their Children.

Executive director Stephanie Patterson-Love says leaving an abusive relationship is the most dangerous time for victims.

"So, when the general public says, 'Why doesn't she just leave? Why would you stay in an abusive relationship?' Our answer is, leaving doesn't always equal safety, and we saw that play out in real time at Mercy Hospital," said Love-Patterson.

Love-Patterson says getting help will give victims the courage and empowerment to end an abusive relationship. She said the time to seek help is when domestic violence starts with emotional and verbal abuse. Carter admits she ignored the warning signs and advice from her family.

"He was a charmer, so I looked past all the bad things because I thought the good would outweigh the bad," she said.

A few months ago, Carter's abuser was given a 12-year prison sentence for attempted murder. Love-Patterson said there needs to be a shift in accountability.

Instead of asking why victims don't leave an abusive relationship, she said, the better question is, why did the abuser use violence in the relationship.