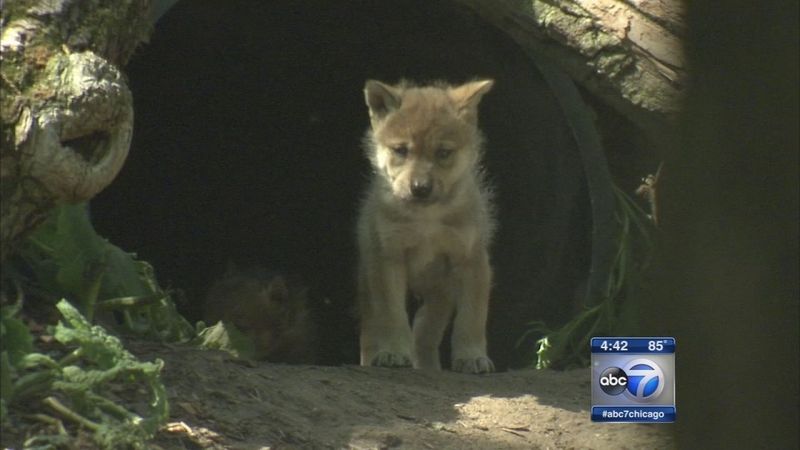 "They're about four weeks old so they're starting to emerge from the den and be more active. So it's quite exciting to see the puppies on exhibit for the first time," said Joan Daniels, Brookfield's associate curator of mammals.

They are part of a comeback story. Two decades ago, the Mexican gray wolf was almost extinct. Hunters and farmers in the southwest and Mexico nearly shot them out of existence.

The Brookfield pups are important for the entire species, which are the rarest subspecies of gray wolves in North America.

Five pups were born last month, but two are now in Arizona living in the wild. The tiny male and female pups flew to Arizona and placed in a den with a new mother and her other pups.

"U.S. Fish and Wildlife has reported that the parents are staying at the den sight so it looks as though the litter has survived in the wild and the two puppies are part of that litter," Daniels said.

The pups will grow up wild.

Back in suburban Chicago, the one female and two male pups will stay at Brookfield for about a year and a half before heading to other zoos and breeding programs.

"I think both sets of wolves really have the advantage. Not only the ones in the wild because they're going to grow up in the wild," Daniels said. "But these wolves here at Brookfield Zoo are part of the wolf recovery program so they all have potential to be part of that and be released to the wild sometime in their lives."