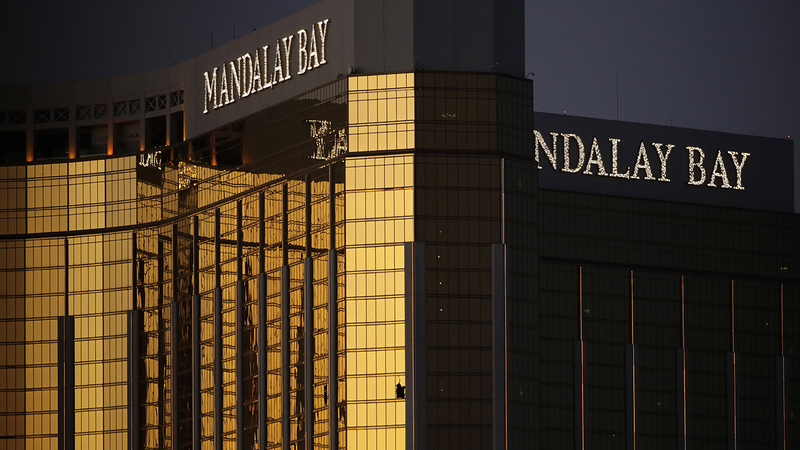 LAS VEGAS -- MGM Resorts International has sued hundreds of victims of the deadliest mass shooting in modern U.S. history in a bid to avoid liability for the gunfire that rained down from its Mandalay Bay casino-resort in Las Vegas.

The company argues in lawsuits filed Friday in Nevada and California that it has "no liability of any kind" to survivors or families of slain victims under a federal law enacted after the Sept. 11 terrorist attacks.


RELATED: Timeline of mass shooting on the Las Vegas strip

The lawsuits target victims who have sued the company and voluntarily dismissed their claims or have threatened to sue after a gunman shattered the windows of his Mandalay Bay suite and fired on a crowd gathered below for a country music festival.

MGM says the 2002 law limits liabilities when a company or group uses services certified by the U.S. Department of Homeland Security and mass attacks occur. The company says it is not liable because its security vendor for the concert, Contemporary Services Corp., was federally certified at the time of the Oct. 1 shooting.

RELATED: These are the victims of the Las Vegas mass shooting

MGM claims the victims - through actual and threatened lawsuits - have implicated CSC's services because they involve concert security, including training, emergency response and evacuation.

"If defendants were injured by Paddock's assault, as they allege, they were inevitably injured both because Paddock fired from his window and because they remained in the line of fire at the concert. Such claims inevitably implicate security at the concert - and may result in loss to CSC," according to the MGM lawsuits.

The company wants a court to declare that the U.S. law "precludes any finding of liability" against MGM "for any claim for injuries arising out of or related to Paddock's mass attack."

Attorney Robert Eglet, who represents victims in a lawsuit pending in federal court in Nevada, decried the casino-operator's move.

"MGM has done something that in over 30 years of practice is the most outrageous thing I have ever seen," Eglet said. "They have sued the families of victims while they're still grieving over their loved ones."
Report a correction or typo
Related topics:
nevadamass shootingshootinglawsuitshooting rampageu.s. & worldlas vegas mass shooting
Copyright © 2022 KGO-TV. All Rights Reserved.
TOP STORIES
9 shot, 2 fatally, on Near North Side
Chicago mass shooting victim ID'd as father of 2, with twins on way
Officer relieved of powers after teen carjacking suspect shot: CPD
United cancels couple's flight, charges $4K more for same seats
Doja Cat drops out of Lollapalooza due to throat trouble
Wild shootout at 7-Eleven store caught on video
South Side high school fight leaves multiple teens injured
Show More
Illinois undercounted by nearly 2% in 2020 Census, bureau admits
IN man pleads guilty to being in US Capitol during Jan 6 insurrection
Lakeview Food Pantry renamed Nourishing Hope amid expansion
Safety top of mind as many prepare for boating season
Chicago Weather: Thunderstorms possible
More TOP STORIES News