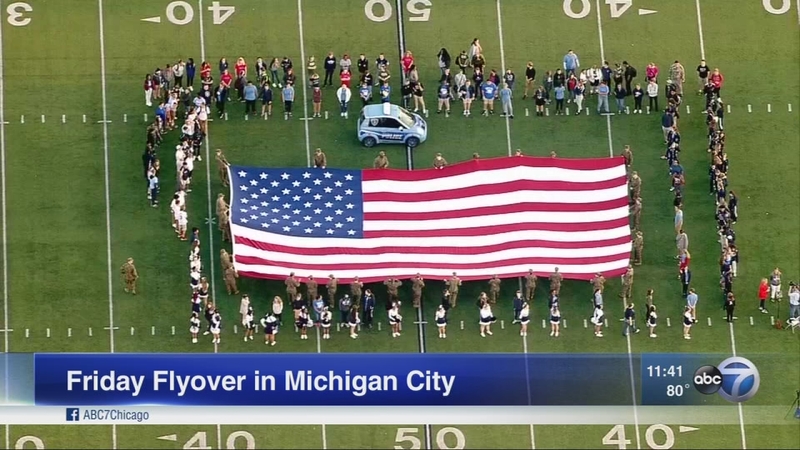 During Friday night's homecoming game, the Wolves will take on the Merrillville Pirates. Varsity kickoff is scheduled for 7 p.m. at Ames Field. This year's homecoming queen will be crowned at halftime. Junior varsity will play at 10 a.m. Saturday in Merrillville.

-The City of Michigan City established the "Michigan City Promise" scholarship last spring - providing $5,000 per year in college tuition for eligible graduates. 33 of our seniors qualified for this program in the first year - and even more are expected to qualify this year.

-There are more than 40 clubs and organizations at Michigan City High School, plus 24 varsity athletic teams.

-We are fully 1:1... one device to one student! Beginning this school year, every student attending Michigan City High School has been issued a Chromebook for use at school and at home. Funding for this major undertaking was provided by our City, our Redevelopment Commission, and grant funding.

-Our "Wolves Den Gymnasium" at Michigan City High School is one of the largest high school gyms in the country. It holds 7,300 people. We are No. 9 in the U.S. when it comes to capacity.

-Our school hallways are a living canvas - large, colorful murals have been painted by our art students, depicting inspirational images and quotes by Albert Einstein, Maya Angelou, William shakespeare, Edgar Allen Poe, Martin Luther King Jr... and much more. Students are also painting their parking spaces out front this year. Come and visit our school to see how creative we are!

-Our high school opened in 1995 - after the consolidation of Elston High School and Rogers High School. Michigan City High School is located on Pahs Road outside the city limits - but our beautiful 4,000-seat football stadium, Ames Field, is still downtown, in the heart of our city.

-The first school in Michigan City was built in 1834 - two years before our town was founded - a few blocks from here, at Fourth and Pine Streets, on land donated by Isaac C. Elston, who was our city's first Mayor. The first high school graduation here in Michigan City was in 1871 - and there were THREE graduates that year. Last year we graduated 346.

-Ames Field is named for Colonel George Ames, an early settler of Michigan City who donated and planted hundreds of trees at our public schools.

-Carter Manny, an architect who studied under Frank Lloyd Wright. His firm designed O'Hare International Airport, the FBI building in Washington, the Chicago Board of Trade and more.

Last year alone we had student-athletes sign NCAA Division I scholarships in football, volleyball, swimming, and track. Not to mention the approximately 20 other student-athletes from last year's class who have gone on to play intercollegiate sports.

We have had two recent state champions in track-one on the 300 meter hurdles, and one a high-jumper who actually cleared 7 feet! That's Daniel Armstrong, of Marquette University, who actually was the freshman of the year last year in the Big East Conference. One of our graduates last year, Noah Scherf, is a Paralympic All American in both swimming and track.
School colors
Navy blue, grey, white

Mascot
Wolves ("Wolfie" will be attending the flyover!)

School song
We're loyal to you MC High
To your colors grey, blue, and white
Which stand for the spirit that helps
Us to win in every fight.
MC High you're the best in the land,
For you're backed by a strong and loyal band.
We'll shout your praises to the sky,
'Cause we're loyal to MC High.