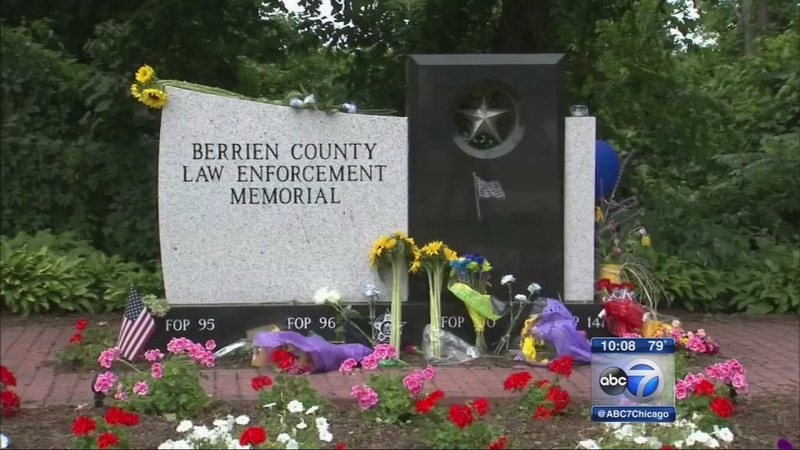 ST JOSEPH, Mich. (WLS) -- Hundreds gathered in Berrien County on Tuesday, where two court bailiffs were fatally shot by an inmate who got his hands on a deputy's gun inside a southwest Michigan courthouse in St. Joseph.

Heads bowed in prayer at the exact moment the shooting took place on Tuesday. Then, the group walked, escorted by police to this memorial for fallen law enforcement officers.

The names of the two bailiffs killed -- Joseph Zangaro, 61, and Ronald Kienzle, 63 -- will soon be engraved on the memorial.

"These guys were just salt of the earth guys and when I heard two guys went down, I wasn't surprised it was Ron and Joe," said state Rep. Al Pscholka.

Family and friends shared stories of love and family.

"He was doing what he loved and when he wasn't doing that he was with his four grandkids, two daughters, his Harley and the Bears," said Gerald Kienzle, the brother of Ronald Kienzle.

The Berrien County courthouse was closed Tuesday. A review of safety procedures is underway.

As the community remembered the fallen officers, more details are emerging about what happened in the courthouse.

Monday afternoon, inmate Larry Darnell Gordon, 44, was leaving a courtroom, where his domestic battery charge had just been dismissed. He still faced sexual assault and kidnapping charges and was due back in court on Thursday.

Gordon was being transferred from the courtroom to a holding cell by Deputy James Atterberry. Gordon was handcuffed but able to get a gun from the deputy and shot him in the arm.

"Ron jumped up. Didn't hesitate, jumped up, ran across the front of my courtroom, headed through that door, getting ready to draw his weapon," LaSata said.

When the first shots were fired, LaSata hit the panic button, which every courtroom has, then, following protocol, barricaded himself and three other court officers inside his chambers.

"The shooter was trying to kick in the door to my chambers, I don't think to get at me, I just think to escape the building. I think he was just confused and didn't know how to get out. I could
hear him kicking the door and shortly thereafter I heard the other shots of the bailiffs arriving and subduing him," LaSata said.

As Gordon tried to take hostages, he also shot a civilian, Kenya Ellis, in the arm. Her condition stabilized at the hospital.

Two other bailiffs and several other officers took Gordon down.

"This could have been a lot worse without them being so brave to go into the gunfire and take this person down," Bailey said. "All indications are he was trying to break out of jail."

But the sheriff said Gordon was not combative before the shooting. In fact, he was cooperative the entire time he was in custody.

Zangaro, a retired Michigan State Police officer, was head of courthouse security and had worked there since 2004. Kienzle, a retired Benton Township police sergeant and U.S. Army veteran, had been a bailiff since 2005.

Bailey said their bodies were escorted to Grand Rapids by the Berrien County Sheriff's Motor Unit and Michigan State Police. An autopsy is scheduled Tuesday.

The community is expected to hold a vigil at a church in Benton Harbor, where people are praying for the victims and their families.

Atterberry, the 41-year-old officer shot in the arm by Gordon, has been with the Berrien County Sheriff's Department since 1998. Bailey said Atterberry underwent surgery and is doing well in the Intensive Care Unit at Lakeland Hospital.

Bailey, the Berrien County sheriff, said he plans to review his department's guidelines for transporting suspects charged with violent crimes.

Initially, Bailey told reporters that Gordon wasn't handcuffed at all Monday during the brazen courthouse escape attempt. On Tuesday, Bailey revised that account, explaining Gordon was handcuffed in front but that the restraint was not attached to a belly chain, which security experts say is a safer way to restrict movement.

"I was told that he was handcuffed in the front and the handcuffs were on him when they removed him from the scene," Bailey said.

Gary Klugiewicz, an inmate transport expert with security consultant Vistelar in Wisconsin and a retired Milwaukee County sheriff's captain, said the lack of a transport belt could have played a major role in the fatal shootings.

"Somebody handcuffed in front is totally able to do just about anything if they're not restrained to any type of belt," he said.